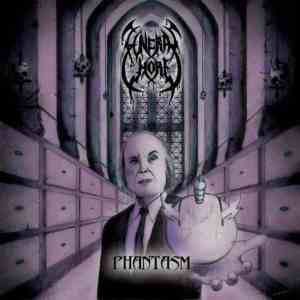 This is the second album from Funeral Whore, who are a Death Metal band from The Netherlands.

We have briefly met Funeral Whore before, during their very tasty split with Obscure Infinity – Summon the Undead.

Funeral Whore play old-school Death Metal that reeks of the crypt and lands somewhere between Incantation, Bolt Thrower and Dismember in style.

As on their split with Obscure Infinity, Funeral Whore are, (deliberately), rough around the edges, lending their music a real underground feeling.

It’s easy to enjoy this kind of atavistic Death Metal, especially when it’s written with songs and mood in mind as these tracks clearly are. Funeral Whore know what they’re doing, it seems.

If you have any love for the old-school style of Death Metal then it’s worth checking out Funeral Whore as Phantasm is a very satisfying listen. 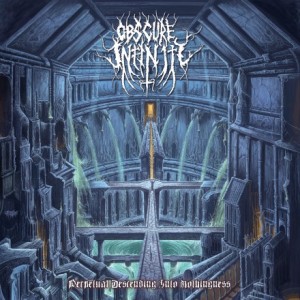 Obscure Infinity are from Germany and play Old-School Death Metal. This is their third album.

I was excited to hear this after the excellent but oh-so-small taster that was their split with Funeral Whore.

After an epic-sounding intro we’re into the thick of the action with Obscure Infinity’s blend of Swedish-style Death Metal, atmospheric leads, and Death/Iron Maiden-guitar influences.

The band have tight control over their songwriting with all of the hallmarks of a band who are able to craft classic songs.

Whether sped up or slowed down, the band pace themselves well and the dynamic guitarwork is impressive. This is a band who are confident enough to simplify things when necessary but also talented enough to throw in some technicality on occasion.

The leads and solos are all blinders and the riffs in general are hugely impressive. The guitars make the songs and give them a vitality that’s rare in Old-School Death Metal. There are plenty of atmospheric moments and even the odd feeling of Old-School Black Metal in places; it’s not a huge influence but it’s noticeable.

The bass and drums underpin everything, providing a firm base for the songs to launch their attacks from. Blast beats are an important staple of the band but they also excel in the more rhythmic moments.

The vocalist is very accomplished, with a lovely deep growl and occasional screams to keep things interesting. Some unexpected cleans even appear on A Forlorn Wanderer, and it’s a testament to the band that they don’t seem out of place at all. It comes across as a mix of Emperor and Celtic Frost and is a great thing to hear.

The recording is first-rate, with plenty of heaviness. The songs sound alive and ready to crush!

Perpetual Descending Into Nothingness is just as strong an album as I was hoping it would be. Occult-sounding, malevolent Death Metal with plenty of texture and colour; Obscure Infinity are making sure that 2015 is starting off with a bang. 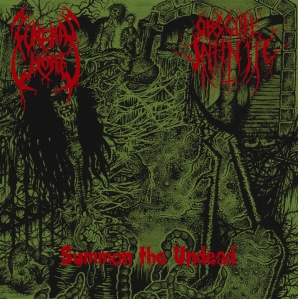 Funeral Whore are from the Netherlands and Obscure Infinity are from Germany. Both bands play Old-School Death Metal.

Funeral Whore start proceedings with two tracks. Traces of Death begins with a menacing riff and an intimidating growl. At this point I know it’s going to be good.

Ultra-low vocals preside over the top of a slow and evil riff before the band become a bit more mid-paced and heavier guitars start playing. The song merges elements of Bolt Thrower and Incantation to create an enjoyable track.

The second track East Area Rapist has a killer Old-School riff that shows the band has an ear for a good tune. Stylistically we’re in the same territory as the first song although this one has a bit more melody and chugs along happily as the drums roll and the vocals make deep, dark noises.

Maniac Destroyer has blastbeats and is a more upbeat proposition overall. A touch of the Swedish Death Metal feel is on the track, (sans That Sound), and the deep vocals punctuate the thick guitars like giant exclamation marks.

Obscure Infinity are like a shot of adrenaline and their track has all of the requisite components of a winner. The main riff is excellent and gives me the same thrilling feeling as when I was first getting into this type of music oh so long ago. One of my favourite parts of the song is the solo section with the rhythm guitars just laying down some excellent backing riffs.

A fine taster for a fine couple of underground bands. For the length this is damn near essential I’d say.