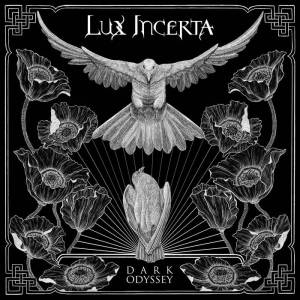 This is the second album from French doom metal band Lux Incerta.

Lux Incerta are inspired by the 90s UK doom scene, and list bands such as Paradise Post, Cathedral, and My Dying Bride as prime influences. Alongside the distinctly non-doom Iron Maiden, which they also state as an influence, the band have used these starting points to craft 61 minutes of immersive doom metal.

Across seven meaty tracks it’s soon apparent that despite Lux Incerta’s musical preferences mentioned above, they’re not restrained to repeating past glories. Instead, there are newer influences on display here too, including elements of progressive metal.

The songs are frequently long and expressive and built from quality materials and well-judged structures. The music builds emotive feeling and rich atmosphere well. This is occasionally enhanced by the use of piano and cello, but even without these the band craft their music with emotion in mind.

Stellar 16-minute opener Far Beyond the Black Skies exemplifies the band’s approach to songcraft, with a gradually-building atmospheric 5-minute intro before the song begins proper. It’s one of the strongest tracks here, but to be honest all of the songs, although shorter than this one, are very strong.

As mentioned, the dark music may be emotive and atmospheric, but the band also have a heavy side and know how to peel off a good riff when the need arises. Their diverse skillset is shown off very ably across the album, and they pull off a range of doom-filled moods and styles; all of them despondent and gloomy, but spanning the crushing and aggressive to the soft and beautiful.

I enjoyed Dark Odyssey a great deal. Lux Incerta’s music is reminiscent enough of their influences, (especially My Dying bride), to be instantly familiar, but distinctive enough so as to clearly place them on the map as their own band and not a tribute act. For fans of emotive progressive doom metal I would recommend spending some quality time with Dark Odyssey.