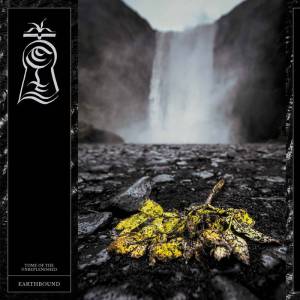 Tome of the Unreplenished are a black metal band from Cyprus and this is their second album.

Containing current and ex-members of bands such as Code, Macabre Omen, and Lvcifyre, Earthbound is a 47-minute atmospheric black metal album that may not be quite what you were expecting.

The music can be furious and visceral, but it can also be considered and refined. On the surface of it this is absolutely atmospheric black metal, but it’s also more than just this, as we’ll see. In fact, I was surprised at just how broad Earthbound‘s reach was. The band leave little unturned in their quest for blackened expression and emotion. Whether this consists of icy riffs and frosted atmosphere, or colourful flute and beautiful melodies, they put everything into the music, with nothing held back. Tome of the Unreplenished weave a tapestry of blackened sounds that will ensnare many a fan of emotive music, no doubt.

Dark melodies enrich the aggressive hymns with shaded depth and texture, while well-constructed songs climb and fall amidst a variety grim moods and eloquent feelings. Harsh screams are occasionally enhanced by soaring clean vocals. The latter, along with certain other aspects and sections of the music, (certain melodies, acoustic guitars, synths), reveal both an epic side to the band’s music that fits in well with their overall aesthetic and folk influences the add texture and flavour to the distinct entity that is Earthbound.

Earthbound is a strong album that gifts the listener an individual vision of what black metal should be. Crafted by confident and experienced hands that know their art well, Earthbound is an album to savour and absorb yourself in.