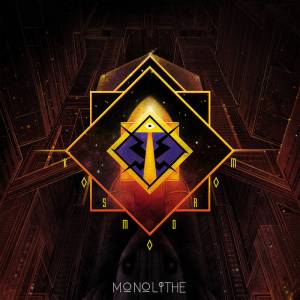 This is the ninth album from French doom band Monolithe.

Monolithe are a band that I have really enjoyed over the years, and you can pick up pretty much anything they have released and be transported into a world of doom delights. (this, this, this, this, this, this or this, for example). Kosmodrom is as epic and ambitious as anything the band have previously attempted, and the album is a 67-minute journey into conceptual spacefaring territories.

Kosmodrom delivers five colossal songs of progressive doom. It is essentially melodic death/doom with sci-fi overtones and progressive flourishes. It has big character, a big sound, and big delivery. Monolithe’s latest has not disappointed.

The songs are well-written and well-developed, taking Monolithe’s established sound further into the effective use of dynamics, mood, and emotive atmosphere. The band’s new tracks are very satisfying to experience, and have lots of nuances and creative touches that only properly become noticeable over time.

Monolithe’s music is always easy to become absorbed by, and Kosmodrom is no exception to this, but on these new songs there appears to be a heightened sense of immersion, as well as some outright hooks. Seriously, some of the keyboard melodies will be rattling around your brain for days after listening to them. Many of the leads are captivating, and some are downright infectious too.

There are four 10-minute tracks, all of which are a world unto themselves, but the album ends with the 26-minute monster that is Kosmonavt, which is probably the album’s atmospheric highlight for me, (with opener Sputnik-1 being the catchiest piece).

Kosmodrom offers some of Monolithe’s most enjoyable material to date, which is saying something considering how highly I rate them. An odyssey of progressive doom metal mastery, Kosmodrom is yet another album from this first class band that I urge you not to miss out on.

Additionally, if you’re lucky enough to get hold of the limited edition CD version, you’ll also get your mitts on the 51-minute bonus album Kassiopea. What treats does this extra album have in store for you? It contains six rearranged covers of The Cure, Metallica, Katatonia, Carpenter Brut, Echo & the Bunnymen, and Massive Attack songs, and boasts a range of guest vocalists, (including the ex-singer of Lux Incerta). Kassiopea is definitely worth getting hold of.

Taken together, both albums provide almost two hours of music. Essential listening for any fan of doom metal.