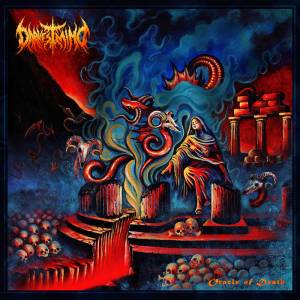 This is the debut album from Belgian black metal band Darkest Mind.

Oracle of Death saw the light of day at the end of last year, and I confess that I overlooked it largely due to its cover. Not that it’s bad artwork by any means, but the bright colours didn’t inspire me to check it out. My loss. Having now had the album brough to my attention once more, lo and behold it’s actually well worth some attention. Don’t judge a book by its cover, and all that…

The songs combine blackened intensity with melodic colour. Dark atmosphere is fostered well, and the music is intelligently structured so that the songs instinctively feel like more then just collections of linked guitar parts. The songs are well-written and have obviously had some thought put into them so that they flow and make use of light and dark well.

The band are quite adept at building from ferocious aggression to powerful grandeur, and this frequently occurs across the album; you can be swept away by the raging guitars, before being uplifted by majestic melodies and atmospheric depth.

The music takes you back to the frosted realms of the 90s quite effectively. Oracle of Death is one of the most authentically old-school black metal albums I’ve heard in a while that isn’t shrouded in primitive production or style; Darkest Mind sound great and have a professional delivery.

I’m glad I stopped and checked this one out. Highly recommended.