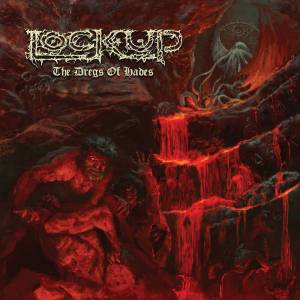 Lock Up are an international grindcore band and this is their fifth album.

Lock Up contain members of bands such as Napalm Death, At the Gates, The Lurking Fear, Brujeria, Brutal Truth, Misery Index, and Pig Destroyer. Yep, here’s a band that have a lot of experience with extreme music. The Dregs of Hades is a ferocious collection of tracks that showcases the band members’ expertise well. Across 38 minutes we get blasting grindcore destruction mixed with death metal belligerence. It’s ugly and heavy, and very enjoyable.

The music is old-school at heart and is both well-written and well-delivered. It’s a mostly fast affair that revels in its aggressive speed, but there is more than enough variation in dynamics and prevent it from becoming stale or one-dimensional; Lock Up know the style too well for that to happen. Punishing groove, burly riffs, and crushing slower sections are all used well to flesh out the music’s brutal offering.

The songs have a surprising amount of catchiness and hooks built into them. This is true of not only the music itself, but also the dual vocal assault of the two singers. I like that this latter part of the band’s sound has both singers interweaving their vocals and playing off each other to good effect, which is something many bands with two singers frequently miss out on.

The Dregs of Hades is simply a very satisfying and enjoyable grind record. It’s music by people that know how to play this style in their sleep, and on The Dregs of Hades they sound very much awake and ready to riot.