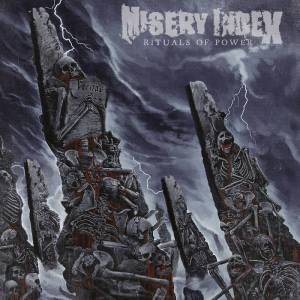 Misery Index are a death metal band from the US and this is their sixth album.

The songs are written with a keen sense of dynamics in mind, despite the high-energy nature of most of the material here. The music never lacks in interest, easily keeping the listener engaged with its fluid assault on the senses. These songs are intelligently crafted and passionately delivered.

The band’s grindcore roots can be heard on the album, although the vast majority of the material here is of a more traditionally death metal nature. Elements of harsh thrash metal can be heard on occasion, as well as a hint of a more modern strain of death metal in some of the grooves deployed here and there. Overall it’s a very strong mix of these styles, with the smaller aspects of the band’s sound adding just the right amount of additional venom in just the right places to help make Rituals of Power such a powerfully effective album.

Misery Index keep refining their brutal art, and on Rituals of Power they have produced a collection of blood-pumping adrenaline-charged tracks that have a depth of delivery and longevity that sits nicely alongside their more obvious assets. As such, Rituals of Power is exceedingly moreish, and at only 36 minutes in length is endlessly repeatable.

Highly engaging and extremely satisfying, this is an essential listen for any death metal fan.