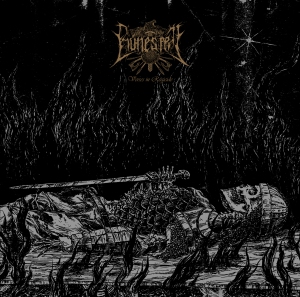 Runespell is a solo black metal band from Australia, and this is his fourth album.

I like a bit of Runespell. I’ve enjoyed watching the band develop from 2017’s Unhallowed Blood Oath, through 2018’s Order of Vengeance, to 2019’s Voice of Opprobrium. It’s now time for a new offering, and Verses in Regicide contains 38 minutes of the good stuff.

The old-school black metal of Runespell reaches its zenith on this latest album. The music is at its grandest and most professional-sounding, despite still retaining a raw and underground feel. Second wave Scandinavian majesty rarely sounds as authentic or as complete as this.

The songs are infused with atmospheric depth and melodic might. Epic emotive colour is layered into the tapestry of the music deeper than normal, and the songs benefit from this immensely, building bold atmosphere with ease.

This is music that concentrates on crafting holistic soundscapes that draw the listener into ancient worlds. Rather than being a collection of songs full of catchy hits, Verses in Regicide presents a convincing vista for the listener to explore as a whole, a vision of orthodox black metal and immersive grandeur. Having said that though, I must confess that some of the melodies here are downright catchy; most songs, (notably Structures of Collapse, or Realm of Fire), have melodies that reach near-Amon Amarth levels of catchiness and hummability. Tides of Slidhr is probably my favourite cut though. It’s the longest track, and boasts many strong features, not the least of which is its melodic heft and bass-driven gallop.

Verses in Regicide brings together everything that Runespell has done so well over the years and combines it into the project’s most well-rounded work to date.