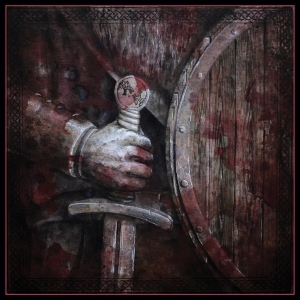 Runespell is a one man black metal band from Australia, and this is his second album.

I enjoyed 2017’s Unhallowed Blood Oath, which gave us seven tracks of utterly authentic 90s second wave black metal. Well, it’s now 2018, and we have yet another seven tracks to consume.

These tracks are generally longer than their counterparts on Unhallowed Blood Oath, with a total duration of 47 minutes. I like that although the music is still firmly rooted in the 90s era of classic black metal, stylistically there’s more than simply one particular geographical influence felt across the songs. The artist behind Runespell certainly knows his black metal history, and the music he has crafted honours what came before him, while still forging its own path through the darkness.

Order of Vengeance is as raw and underground as you would want something like this to be, but it’s held together by a murky, shadowy strength that comes through in the music. The harshness of the songs is ably offset by its emotive qualities, however, which is one of the many reasons why the music is as affecting and effective as it is.

Grim melodies and esoteric, macabre atmospheres are created and unleashed with the ease of a master tradesman going about his work, but one that still feels passionate about his craft. Add to this the music’s more direct, aggressive side, and you have an accomplished slice of underground darkness that should appeal to any fan of traditional, orthodox black metal.

This is mystical black metal that’s not afraid to get its hands wet with the blood of its enemies. Order of Vengeance is a fine new release from Runespell, one that I actually rate higher than Unhallowed Blood Oath, despite how enjoyable that debut album was.

One thought on “Runespell – Order of Vengeance (Review)”