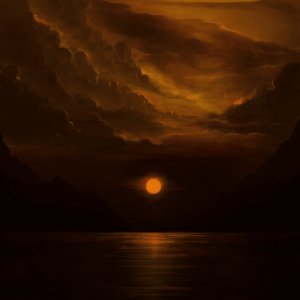 This is a gargantuan four-way split, consisting of 15 tracks across a total duration of 96 minutes.

Thy Darkened Shade are a Greek black metal band. Their part of the split consists of four tracks, with a duration of 23 minutes.

I’ve never encountered Thy Darkened Shade before, and after an intro that has a ritualistic feel to it, they reveal themselves to be occult black metal, with a range of different elements in their sound.

The songs have a Greek black metal influence, but this has been incorporated into a strong Norwegian second wave presence. The latter is of the sophisticated Emperor-esque side of the style, and the music includes clean singing and an epic streak that’s impressive. I also like that you can hear the bass and what it gets up to.

I really like these songs. They have a lot of character and blend together blackened aggression with occult feeling very well. Thy Darkened Shade are professional and competent, and I look forward to hearing from them again in the future.

Amestigon are an Austrian black metal band. Their part of the split consists of three tracks, with a duration of 25 minutes.

Another band I’m unfamiliar with, Amestigon contain an ex-member of Abigor and a member of Summoning, so I’m expecting good things here.

Amestigon deliver, I’m pleased to say. The band’s music has a sinister atmosphere that seems to crawl from the abyss. It also has a progressive doom feel to it in places. The melodic side of the band is quite nuanced and wide-ranging, from Middle Eastern melodies to blistering melodic speed.

These three tracks offer up a varied and inventive journey. This end result is a compelling piece of work from Amestigon.

Inconcessus Lux Lucis are a UK black metal band. Their part of the split consists of five tracks, with a duration of 21 minutes.

Now, I am already familiar with Inconcessus Lux Lucis – from 2017’s enjoyable The Crowning Quietus – so I have been looking forward to hearing their section of this split.

Theirs is a more heavy/thrash metal influenced version of occult black metal, although these five tracks start with rich symphonic splendour. There’s also a creative and layered instrumental acoustic song in the middle of the five. The band’s section closes with a ritualistic outro.

The two main songs songs are spiked and jagged, offering this release’s most visceral and immediate experience thus far. Savage blackened thrash tears by at breakneck speed, while daemonic vocals menace and threaten.

Shaarimoth are a Norwegian death metal band. Their part of the split consists of three tracks, with a duration of 27 minutes.

Shaarimoth are another band I already know. 2017’s Temple of the Adversarial Fire was a monstrous slab of blackened death metal, and since then I’ve been hungry for more of the band’s brand of evil.

If anything, these three new songs are even more malignant and foul than the band’s last release was. The songs drip with malice and the promise of forgotten rituals. Brutality is offset with dark melody and grim atmosphere, and Shaarimoth’s songwriting is strong enough to tie these elements together into a seamless whole. Shaarimoth haven’t disappointed, and close this release with apocalyptic finality.

On SamaeLilith: A Conjunction of the Fireborn all four bands offer up a different vision of darkness, but all of four parts of this album flow together very well, completing an involved ritualistic hymn to esoteric arts.