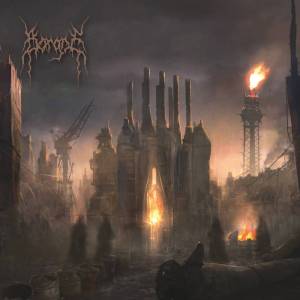 This is the tenth album from Swiss black metal act Borgne.

I’m not the biggest fan of industrial black metal in general, but when it’s played well, it works. Temps Morts is one such album. Red Harvest and early Aborym are some of my favourite exemplars of this sort of style, and Temps Morts falls somewhere between the two, stylistically. Add to this some Blut Aus Nord elements, a pinch of Midnight Odyssey‘s expansive atmosphere, and just a hint of The Kovenant’s catchiness, and you have an album that’s very engaging and surprisingly compelling for something of this duration. And to its credit, Temps Morts may be long, but it largely holds the listener’s attention.

The band play their industrialised darkness with atmospheric depth and keen songwriting ability. Their skill at merging instant appeal hooks with aggressive substance, infectious melodic sharpness, and mood-drenched appeal is quite impressive. This is a form of black metal that revels in smashing together aggressive bite and textured atmosphere. It also adopts a nuanced and multifaceted approach that sees a variety of creative flourishes appear across the album. The songs make the most of their rich ingredients, offering up an experience that reminds me of why I do actually really like this sort of music when it’s produced to such high standards.

Temps Mort is an impressive and enjoyable album. I heartily recommend this for anyone who is a fan of atmospheric industrial black metal.