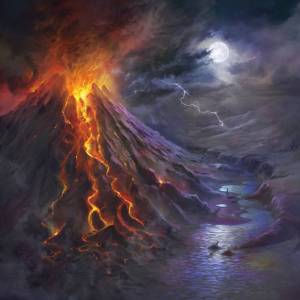 This is the debut album from Udånde, a solo black metal band based in Slovakia, augmented by as session vocalist and drummer.

Now here’s an album to thoroughly scratch that modern black metal itch. Life of a Purist is atmospheric and melodic, without being entirely beholden to either strand of black metal. It’s an album that embraces the modern side of the style, including aspects of post-black metal such as its inherent tendency towards resplendence, yet still carries with it recognisable elements of the Scandinavian second wave.

The songs have a hypnotic, rhythmic quality to them that’s compelling and captivating. The tracks are intelligently-crafted and rely on mood and feeling to weave their dark arts. The music is saturated in feelings of melancholy and dark emotion, and the music portrays these very effectively. The band have an easy mastery of these elements, and these are songs of substance and depth.

All of the musical aspects are well-crafted and well-judged, but I particularly like the use of bass. The drumming is organic and powerful, yet nuanced, and the vocals darkly potent and performed with a satisfyingly deep growl. The guitars are frequently notable, especial the leads. In fact, many of the leads are sublime, swirling around the music’s blackened core like liquid light. Holistically the music flows like this too, from one track to the next, but also within the songs themselves. Life of a Purist feels alive and constantly moving, sometimes in a gentle trickle, and sometimes in a rushing deluge.

Life of a Purist is an exceptional album that will be very at home in the collections of any fan of thoughtful, textured black metal.

One thought on “Udånde – Life of a Purist (Review)”