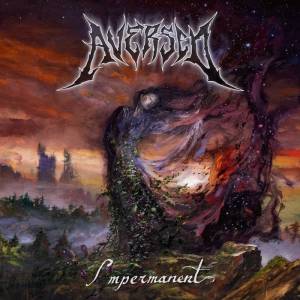 This is the debut album from US metal band Aversed.

Containing 57 minutes of material, the album’s style is one that takes melodic death metal as a base, and then builds on this with elements of progressive metal, melodic black metal, melodic thrash metal, and orchestral power metal. The end result is music that combines aggressive bite with catchy hooks and progressive depth. The promo blurb says that Aversed should appeal to fans of bands like Arch Enemy, Soilwork, Nightwish, Allegaeon, Ne Obliviscaris, The Gathering, and In Flames, and this seems quite accurate; if you crush all of those groups together and reshape them into something new, then you’d probably end up with something that sounds like Impermanence.

With well-written songs that are powerfully captured by a professional recording, the album has a bold presence from the start. The band clearly know their strengths and play to them frequently. These involve crafting high energy metal songs that rip your face off with jagged riffs and serrated growls one moment, and uplift you with sharp melodies and commanding clean singing the next.

With plenty of anthemic choruses to rely on, it’s pleasing that the band haven’t neglected the other parts of the songs in favour of these obvious highlights. No, equal attention appears to have been spent on the heavier, more aggressive sections. I also like the progressive aspects of the music, which showcase not only the technical chops of the band, but also their ability to compose layered, textured metal music that keeps you returning for more.

The singer’s voice is accomplished and well-performed. Her growls are effective and nicely hostile, while her clean singing voice is soaring and strong. Although an obvious focal point for the songs, the music holds its own too, and Aversed have the full package.

Impermanent is a strong album made by professional hands. It has a lot to offer fans of modern progressive/melodic metal, and I highly recommend that you check out what Aversed are up to here.