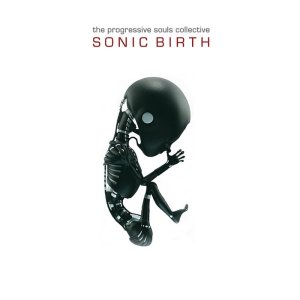 This is the debut album from The Progressive Souls Collective, an international progressive rock/metal supergroup of sorts.

Here we have 63 minutes of music that features current and ex-members of a range of bands, all brought together by a central figure. I picked this album to listen to initially due to the striking album art, but never thought it might be as good as it is. The initial sampling I undertook made me want to listen to it properly, and I’m glad I did; Sonic Birth is an unexpected treat.

Sonic Birth is well-written and the songs benefit from many catchy and memorable moments. Each of the tracks has its own personality and offers something different, making it an album that you could drop into at any point and quickly be able to orient yourself. The music mixes old and new progressive influences, combining melody and technicality with ease. It’s rich and multifaceted, boasting a variety of moods, paces, atmospheres, and ideas.

A huge amount of different musicians contributed to this album, and it includes electronics, horns, violins, cello, harp, and a range of others alongside the standard instruments you would expect for a release like this. All add value when they appear. Most notable and prevalent of these are the keyboards, which are very well-performed and deliver everything from adding extra background layers to taking central position with expressive solos.

The singer has an impressive voice, showcasing good range and ability. He certainly can’t be accused of singing in the same style too much for too long either, and his performance is emotive and strong. His voice reminds me of a combination of singers, from bands such as Soundgarden, Howling Sycamore, Dio, Queensrÿche, Between the Buried and Me, and more. Other backing and guest vocals appear also, in places, but he’s the star of the show.

I thoroughly enjoyed Sonic Birth. It’s a very accomplished album, one that any fan of progressive rock or metal should take the time to explore.