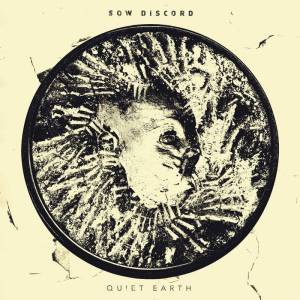 Across this album the artist behind Sow Discord fuses industrial and noise influences into a doom-fuelled 45 minutes of dark apocalyptic atmospherics. He does this very capably, with a keen ear for texture and malevolent mood. He’s joined on a couple of tracks by members of Primitive Man and The Body, who lend their own noise-enhanced skills to the proceedings.

Quiet Earth is all about the crafting and sustaining of grim atmosphere and brooding, menacing soundscapes. This is not a work that rewards casual acquaintance; this is an album that requires attention to truly process and absorb, and once given, it can become quite immersive. It’s an album that does not give up its secrets easily, however. These songs twist, warp, and mutate under scrutiny, revealing hidden secrets and depths only after challenging the listener to work for their rewards.

On a more prosaic level, one of the reasons that Quiet Earth works for me over other ostensibly similar noise-based albums is that it has an undeniably rhythmic quality to it, despite how malignant and unfriendly this can manifest itself as. Frequently employing percussive elements and sometimes actual drumming and beats, I find that this helps me engage with the music better than other acts that might lack this musical aspect.

Quiet Earth is a album for people that want dark atmosphere and percussive engagement in their noise, rather than just abrasive sounds for the sake of it. As such, it’s a solid album for the style that’s much better than most.

If you’re a fan of experimental texture, then don’t miss out on this.