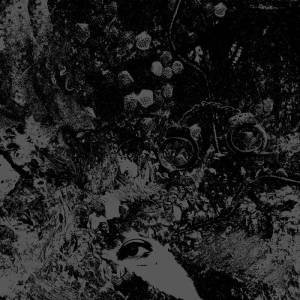 This is a split between two US doom metal bands – Primitive Man and Unearthly Trance.

After an initial 60 seconds of savage noise, which is apparently a collaborative effort between both bands, we get two ugly, nasty pieces of venom from Primitive Man lasting 20 minutes in total.

Primitive Man excel at creating horrible nightmarescapes of extreme foulness and misery. On this split they achieve this through two tracks – one of hideous doom, (Naked), and the other of dark ambient/scathing noise, (Love Under Will).

Naked is brutal and despairing, moving with monolithic intent and punishing, grim intensity. This song is filthy and putrid, and very, very heavy. Developing from feedback-drenched hatred to ultra-slow doom, then on to crawling malevolence, the track builds up to and ends with cascading waves of crushing force. Also, I love the singer’s utterly pitch black corrupted vocals. His voice is just fantastic, it’s as simple as that.

Love Under Will is bleak and intimidating, fashioning an experience of despair and terror via samples, noise, and pure darkness. Slowly unfolding with a tension you can taste, the track writhes with evil as it progresses. Dark ambient/noise is not normally my thing, but this is more than passable.

We then move on to Unearthly Trance, who contribute, 23 minutes of material, spread out over 4 tracks.

Largely a more straightforward proposition than Primitive Man, Unearthly trance’s doom metal is sludgy and murky, filled with character and dynamic intent. There’s a real confidence about these songs, and they are finely executed by a band that obviously know their art well. Less grim and malicious than Primitive Man’s tracks, but certainly not without their own sense of an innate darkness, this is music driven by good songwriting and skilled delivery.

Gloomy groove and hefty doom riffs swamp you as you progress through the songs, and the band’s heaviness almost feels tangible. Although elements of noise are occasionally incorporated into the songs, this is done in very focused and deliberate ways.

Like Primitive Man’s side of the split, the last track by Unearthly Trance is a dark ambient/noise offering, and is once again more than passable, offering plenty of immersive atmosphere across a howling soundscape.

This split release is a highly enjoyable piece of work by two bands operating at peak efficiency. Get your hands on this and revel in the blackness.