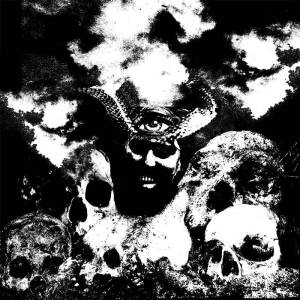 This is a split release between two of Doom’s darkest stars, Primitive Man from the US and Sea Bastard from the UK.

Both excel at what they do and having both of them on one release is quite an exciting prospect.

Primitive Man start us off with two tracks of the grimmest, most evil Sludge-fuelled Doom that there is. It’s 17 minutes of agonised pain and hatred. After many releases, (here, here and here, for example), I still can’t get enough of the horribly bleak noises that they make.

Colossally heavy and nihilistically bleak, Primitive Man always deliver the goods, and on this split it seems that the goods are well past their best-before-date and covered in filth and dirt.

The singer has hands-down one of the best pitch-black growls I’ve ever heard and when his voice first makes an appearance on Cold Resolve it’s like being floored by a truck. That’s if the slow, crushing guitars haven’t flattened you before then. The song proceeds to crawl across your broken corpse, all distorted malice and squealing feedback, slowly pressing you into the ground until there’s nothing left.

The second song of theirs is the shorter of the two, yet is no less nasty for it. Servant starts off with a feedback squeal and is typically crushing from then on in, once again showing off the kind of high-quality Doom that the band have become known for. Dripping with spite and rage-fuelled negativity, as the track unfolds things just get heavier and darker until the playing time is mercifully over.

But there’s no real breather, as we now have Sea Bastard’s colossal near-20 minute behemoth of a track, The Hermit, to deal with.

Like Primitive Man, Sea Bastard keep unleashing quality releases on the world, (here, for example), and this is no exception.

Sea Bastard’s Sludge Metal is less dripping with filth than Primitive Man’s, but no less effective for it. Previously I’ve described them as similar to Bongripper only with screams and growls, and that’s not a band starting point for initial reference.

Sea Bastard specialise in settling into a slow-burning crawling-groove, with a mesmerising heaviness drawing the listener in and repeating itself over and over, but never to the point of where the listener loses interest. This is enticing and hypnotic, and just when you can’t take it any more the band shift gears or change riffs and the suffocating Doom takes on a different edge, no less crushing than the last.

The screamed vocals are the perfect accompaniment to the music’s guitars, and the combination of the two produces a very satisfying feeling deep in the stomach where the bass seems to have set up home.

Picking up the pace a bit halfway through, the band show that it’s not just slow riffs that they can peel off with ease. This doesn’t last, of course, and once spent the juggernaut returns to a malevolent crawl as the song claws its way to conclusion.

The Hermit is just as good as anything the band have released, and combined with Primitive Man’s side of the split this is a pretty damn essential Doom release for anyone who’s into this kind of thing.