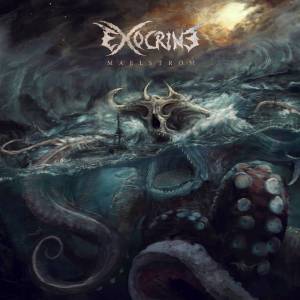 This is the fourth album from French death metallers Exocrine.

Here we have a 42-minute blast of technical death metal. Modern in style and feel, with various progressive and melodic elements, Maelstrom makes a good impression. A very, very good impression. Repeated spins only cements this. I enjoyed 2018’s Molten Giant, but this is superior.

Amidst the technical ferocity that you’d expect on an album like this, the band widen their approach with a variety of tools. Sometimes this might be a simplification into pure crushingly brutal breakdowns, or maybe an atmospheric section replete with engaging melody. Maybe you fancy a bit of a more emotive part that even features some clean singing? Maybe it’s some jazzy sections that float your boat? Exocrine have you covered. On Maelstrom Exocrine have clearly pushed themselves more than ever, producing their best work to date.

If you mix bands like The Faceless, Archspire, Rivers of Nihil, and Obscura together, you’ll have a good idea of a starting point for Exocrine’s sound. However, Maelstrom is strong enough and has enough of its own personality to compete with those bigger names on its own terms.

It’s a varied and rewarding listen, especially as so many bands of this ilk try to overreach and fall short. On Maelstrom, Exocrine may reach far, but their grasp is just as lengthy. Capable and professional, well-written and memorable, this is an album that stands head and shoulders above many of their contemporaries.

There’s nothing here that we haven’t actually heard before – even the more avant-garde inclusions such as symphonic elements, jazz influences, or use of a trumpet have been used by other bands – but that doesn’t stop the album being on the cutting edge when compared to the death metal masses. Additionally, it’s what Exocrine do with these various ingredients, and how they shape and forge them into something extremely enjoyable and remarkable, that matters.

Maelstrom is so accomplished and strong that I can’t help but love it. If you’re in any way a fan of this sort of modern extremity, then I can’t recommend this highly enough.

One thought on “Exocrine – Maelstrom (Review)”