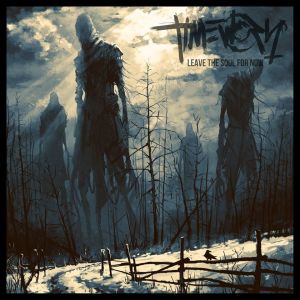 This is the third album from Timeworn, a Norwegian sludge metal band.

This is riff-friendly sludge metal, with both a hardcore influence and an atmospheric one. There’s a mix of the harsh and the beautiful here, which is weighted towards the energetic former, but the latter is still an important part of the band’s sound too.

Across eight tracks and 56 minutes the band deliver music that can cause furious headbanging one moment and gripping emotive absorption the next. Mixing bludgeoning groove and post-metal atmosphere, the band go about their work with passion and skill.

Delicate melodies and thick, monstrous riffs share space quite companionably. There are elements of stoner metal that can be heard, but not overwhelmingly so. Progressive metal gets a look-in too, adding further depth of delivery to the well-crafted music.

The vocals alternate between rough hardcore-infected shouts and cleaner singing that manages to be feel both emotive and vital. Like the music, there’s a fair degree of variety to be had in places too with how the clean singing is used and how it fits with the rest of the music. Some tracks like Hellwater, for example, are fully clean, (and as a side note, this song has an Alice in Chains vibe to it which works very well).

The songs are nicely differentiated, and it’s easy to recognise any of the eight tracks and what it has to offer the listener quite quickly. Each song has something to say, and each is worth listening to. The album boasts a multitude of hooks and a lot of catchiness, but importantly sitting behind this you have songwriting depth that brings you back for more.

Leave the Soul for Now is a very strong and enjoyable album. Mixing aspects of bands such as Mastodon, Cult of Luna, Baroness, and The Ocean, while still managing to retain more than enough personality and character of their own, Timeworn have produced a winner here.