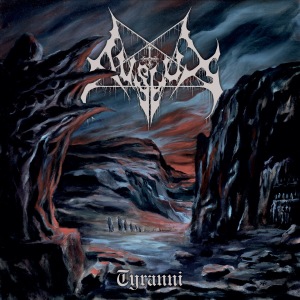 This is the second album from Swedish black metallers Avslut.

Hot on the heels of last year’s Deceptis now comes Tyranni, with 47 minutes of cold fury. This is black metal of the old-school Swedish variety; vicious and evil.

Powered by brutal aggression and venomous misanthropy, this music is fast, bladed, and near-relentless. Blackened melodies are wielded like weapons, while the singer’s rasping screech complements the music well. The songs are well-written, and it’s clear that Avslut feel very passionate about their material. They also know what they’re doing with it, and Tyranni is really easy to listen to if you’re a fan of this sort of Dark Funeral/Marduk-inspired assault.

There are atmospheric moments to be had here, but this album is mainly concerned with attacking the listener, not transporting them off to far away lands. However, the band frequently employ well-judged keyboards, which add extra atmosphere and a layer of darkened emotion to music that’s largely all about controlled rage. The end result is an album that’s strong and virile.

I can’t help but really take to music like this. Its uncompromising nature is infectious, and the band’s abilities are such that while it absolutely recalls the past, it also forges ahead to the future with confidence and power.

A recommended listen for any black metal fan.