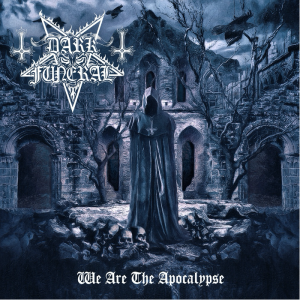 This is the seventh album from Swedish black metal veterans Dark Funeral.

Following on from 2016’s very enjoyable Where Shadows Forever Reign, We Are the Apocalypse contains 44 minutes of Dark Funeral doing an updated version of what Dark Funeral do best.

Dark Funeral know their blackened art, and they know it very well. Despite existing for almost three decades they have consistently chosen quality over quantity, and We Are the Apocalypse exemplifies this well; these songs are well-written, festooned with hooks, and are a superior example of how to play the classic blackened style with individual character and skill. Their sound has developed a little on this album though, and the band have tried a few different things. This is especially apparent in the guitar and drum departments, and these new approaches have reaped rewards.

All of the music is dark and cold, and all of the band’s sinister building blocks have been intelligently-crafted into songs that hold the listener’s interest with ease. The tracks are packed with engaging riffs, serrated rhythms, blistering drumming, darkly resplendent melodies, and well-performed harsh blackened vocals.

The songs are frequently fast and aggressive, but not without melody, catchiness, or depth. The blast beats are plentiful and potent, as you would expect, but a range of paces and moods appear across the album. This results in a surprisingly diverse record, where each song has its own character and feel. Even the ones that are blast beat-heavy feel well-differentiated against their peers through good songwriting, good ideas, and good performances by all band members, (I particularly enjoy the drums on this record). Other songs like the album’s mid-point When I’m Gone put the emphasis on the band’s lesser-explored slow, mournful, and atmospheric side.

This is a very accomplished record. It has been created by professionals who appear to have lost none of their passion for their art. I always enjoy Dark Funeral’s work, but I’ll be honest in that I wasn’t expecting something quite as strong as We Are the Apocalypse is.

If you’re a fan of second wave black metal and you want to hear the real deal played by masters of the style, then look no further than this.

4 thoughts on “Dark Funeral – We Are the Apocalypse (Review)”