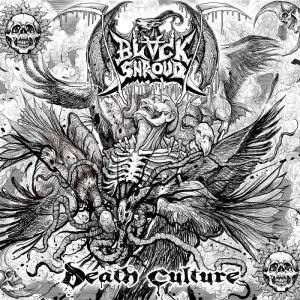 This is the debut album from Black Shroud, a blackened death metal band from the US.

Black Shroud play a black/death metal hybrid that focuses on muscular death metal backed up by blackened aspects that provide an extra layer of grimness and macabre atmosphere. This blurring of the black/death lines in Black Shroud’s capable hands makes for an enjoyable and satisfying listening experience.

Despite this being the band’s debut release there’s no inexperienced exuberance leading to overreaching here; the songs are well-written and demonstrate a band with a keen ear for restraint and power. Black Shroud clearly know what they want to achieve with their music, and write songs that display a wilful consideration of mood and dark character. Focusing on the feel and texture of the songs, and how their various parts contribute to the whole, the band keep the listener in the palm of their collective hands for the full 28-minute duration.

The singer’s voice is a definite asset to the band, as his guttural growls are deep and forceful. With a great and terrifying presence, his voice reigns over the music and threatens to eat it alive and still screaming.

Apparently Death Culture was self-released at the start of the year. It’s now getting a new lease of life via War Productions. I’m very pleased by this, as it’s likely I would have missed it otherwise.

For high quality blackened death metal, look no further than this.