Tonight’s sold out show offers up a double hit of extremity, with the sheer brutality of Ingested and the hooked melodic aggression of The Black Dahlia Murder.

I’ve seen Ingested quite a few times over the years, (the last time also with The Black Dahlia Murder, no less), but it’s only recently that I properly heard their recorded work; this I enjoy, but live is where they truly shine. Every time I’ve seen them so far they’ve been brutally entertaining, and tonight is no exception.

Ingested may be the opening band tonight, but they’re definitely a draw in their own right and the floor is packed. Maybe it’s not surprising as this is a home show for the band.

Of you’re into slam-friendly death metal then Ingested are shockingly easy to get on with. Full of meaty riffs, muscular breakdowns, belligerent blast beats, and thick chugs, a well as a surprising amount of songwriting skill for this sort of thing, Ingested are rarely going to disappoint live. The crowd lap it up and there’s a mosh pit almost instantly.

Blessed with more charisma and personality than the average death metal frontman, the singer of Ingested controls and directs the mayhem with skill and presence. Even microphone problems can’t really dampen his enthusiasm or the crowd’s exuberance, and once these technical problems are fixed the band treat the crowd to a brand new song. This new track ties in perfectly with the band’s existing material. Mouth of the Abyss sounds pretty damn good, and bodes well for the future.

The final song – Invidious – sees the first stage divers appear, and even the singer has a brief crowd surf. Ingested may not be headlining tonight, but nobody appears to have told either the band or the crowd.

Brutal carnage doesn’t always sound as enjoyable or as fun as this. Top work Ingested. 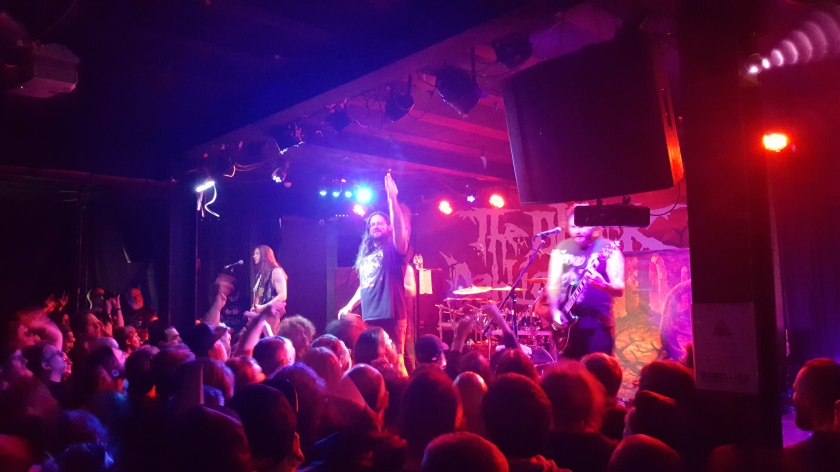 And now to the main event. Peeling off many prime cuts from their impressive discography, The Black Dahlia Murder are practised hands at their craft. I could mention some highlights, (and will), but honestly you could pick pretty much any track aired tonight and be on to a winner. For their set the band do what they do best and deliver razor-sharp, catchy, and highly enjoyable death metal. The crowd are definitely up for it tonight, and are even more energetic than they were for Ingested. The Black Dahlia Murder know how to make people move.

Widowmaker and Jars start us off with a strong one-two combination. Miasma is a particular favourite of mine. What a Horrible Night to Have a Curse – another favourite – briefly features the singer of Ingested on vocals before he launches himself into the crowd near the end of the song. The rhythmic brutality of Malenchantments of the Necrosphere is crushing in its delivery. Everything Went Black nearly destroys the place, and finally long-running closer I Will Return plays us out in style. The crowd show their appreciation more than suitably.

A clear, clean sound means we don’t miss a second of the violent bloodshed across all 19 cuts that are unleashed. The crowd make the most of this emphatically; It’s stage driver central tonight.

In many ways there’s not much to say about a show like this, as The Black Dahlia Murder are so good at what they do, and are such a well-oiled killing machine, that great shows like this are just normal for them. A lot of bands strive hard for this level of proficiency and quality, but The Black Dahlia Murder make it seem easy through years of putting the time in and pumping out prime death metal live night after night.

If you get a chance to catch this band do their thing, I heartily recommend it.