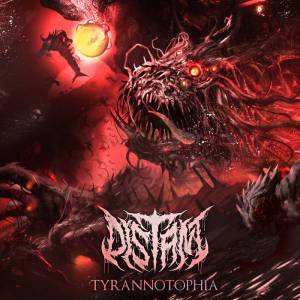 This is the debut album from Distant, a deathcore band from the Netherlands.

Tyrannotophia combines underground slam-infused death metal with brutal deathcore. It’s easy to be lazy with this sort of thing and end up with a generic record, but Tyrannotophia is definitely an above-standard release.

Now, when we talk about deathcore in this context, we’re talking the sort of underground nastiness that bands like Infant Annihilator and Analepsy do so well, and not the more stadium-friendly metalcore variety. Distant take this extreme form of deathcore and drag it down into slam waters. Kicking and screaming against this cruel fate, the band then proceed to beat it to within an inch of its life.

The end result is music that has the chugging, breakdown-infested, pit-friendly side of bands like Ingested and Pathology, and the savage aggression and outright destructive capability of someone like Vulvodynia. Add to this plenty of slower, massively heavy sections, and you have a pretty solid album. However, one of the things I like about Tyrannotophia is that it also has a keen sense of dynamics and, (whisper it), atmosphere in places. Sometimes the band can’t resist adding a dash of melody, or creating a section that’s more atmospheric than the norm, or introducing a sense of extraterrestrial dread, or a handful of other creative ideas that help differentiate them from their peers.

It’s hard to remain still when listening to something like this, and why would you really want to? Distant seem to know their style very well, and Tyrannotophia is a high quality listen for anyone that likes their face torn off and throat crushed.

Like Analepsy, (a favourite of mine), Distant offer the standard deathcore/slam recipe we’ve tasted many times before, but they simply prepare and deliver it better than most. Tyrannotophia is huge fun and brutally enjoyable.