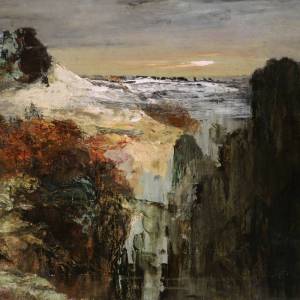 This is the debut album from French post-black metal band Heaume Mortal, (featuring a member of Eibon and Cowards).

There are six tracks on this album spread out across a sprawling 58 minutes of material, (including a Burzum cover). This is music that’s dark and crushing, while also containing aspects of resplendence and writhing, textured colour.

Solstices mixes atmospheric black metal with expansive doom and post-metal to create music that is a masterclass in how to create harrowing, unsettling blackened nightmarescapes.

The post-metal wall of guitars approach is readily adopted, (think early Cult of Luna, for example), and this is blended with black and doom metal to create imposing edifices of crushing intensity. This rhythmically destructive groove is a strong starting point that the band use as a base of operations to then spread their darkness and terror into wider musical territories.

Moments of dissonance can be heard, alongside occasional snatches of cleaner, softer moments. Faster sections raise the energy levels here and there, and sinister melodies streak out of and around the music like venomous predators. The guitars buzz and threaten, and it’s hard to really know whether to classify this as more on the black metal or doom side of things. Ultimately it’s both, of course, although I suppose black metal wins out through sheer force of the blackened atmosphere and mood that saturates everything.

The album is rich and varied, with each track offering something slightly different for the listener to become absorbed in. There’s not a filler track to be seen, and even the two-minute South of No North is an actual song, with a worthwhile voice of its own. The final song – Mestreguiral – is an ambient mood piece that’s more affecting and effective than most of its ilk.

The vocals are firmly of the black metal persuasion; needle-thin screams that seem to scratch at the inside of your head with static-like persistence. These are my favourite sort of vocals for atmospheric black metal, and they are very effective within Heaume Mortal’s wider sonic framework.

You can tell that a lot of love, care, and effort has gone into crafting this dark, virulent album, and it has paid off handsomely. Solstices is a tour de force of post-black metal and crushing doom. Very impressive, very enjoyable.