This tour revolves around Cult of Luna playing all of their fourth album, Somewhere Along the Highway, in its entirety for its ten year anniversary. As they’re one of my favourite bands and that album is sooooo good, this tour was one not to be missed as far as I’m concerned. The quality support acts of Bossk and Moloken are simply an added bonus.

Due to traffic I arrive later than intended and Moloken are already playing, although I think they’d only just started. They make an enjoyable racket, interspersed with moments of lighter brevity that serve as precursors to the heavier parts.

Sound-wise they manage to strike a good balance between roughness and clarity, with the bass shining in particular. The band, (and again, bassist in particular), give a vigorous performance and show plenty of energy, culminating in the final song of their set which they give their all to and is probably the one I enjoyed the most.

The softly-spoken band members are men of few words throughout, preferring to let the music do the talking. The progressive structures and Post-Hardcore auras of their work come across well on stage. Their entwining guitar melodies and multi-vocalist approach works a treat and appropriately sets the mood for the evening to come.

By the end of the set Moloken leave the stage having proven themselves in the live environment in their own right, as well as sufficiently warming up the initially-sparse-but-growing-all-the-time crowd. I really enjoyed them.

I’m a fan of Bossk’s older work, but I haven’t had a chance to hear their newest album yet. I’ve also seen them live before so know they put on a good performance. Tonight, bathed in blue light for the entire performance, the band once again show they have what it takes to command a stage with presence and charismatic delivery.

The band make a relatively low-key entrance, all breezy-atmospherics and bright Post-Metal melodies, building intensity as the first song progresses. They easily settle into some quite hypnotic riffs and show a mastery of their sound, bending squealing feedback to their will and dominating with heavy Doom-grooves.

So enticing is the music that when the harsh vocals initially appear it’s almost jarring at first. Soon they become just another weapon in their sonic arsenal though, albeit one rarely employed. Performed by a singer who is absent from the stage for the vast majority of the set, said vocals are few and far between, and this is to their advantage as the music fully-absorbs. We also get some indie-esque cleans during one song from one of the guitarists, which is a new aspect to their sound, (to me at least).

The sound is strong and clear throughout, allowing the band’s music to become transcendental, making you almost forget you’re in a now densely-packed and sweaty club. Instead, you’re transported by dint of impressive soundcraft to other, more awe-inspiring places where Bossk stand apart as master-crafters of their art.

Yeah, yeah. Basically, they rock and I’m not disappointed.

As a captivated audience ends up thoroughly satiated with Bossk, we now await the main event.

The crowd seems to be at breaking point and the venue is probably the busiest I’ve seen it. Saying something like “the atmosphere is electric” may be a bit of a cliché, but it’s certainly apt.

The lights dim. It begins.

But not as I expected. Instead of launching into Somewhere Along the Highway, they instead open with The Sweep off Vertikal, followed swiftly by Light Chaser, from Vertikal II. After this they delve into some of the highlights from their extensive back catalogue and proceed to woo the crowd with their genre-shaping brand of progressive Post-Metal.

Owlwood initially suffers from a slightly imbalanced sound, which soon clears up a bit and improves over time, revealing the full majesty of the Cult of Luna live experience. Three guitarists and two drummers is an imposing and impressive proposition for any band, but Cult of Luna make it seem like the most natural thing in the world. The band play like it’s in their blood and their performance is full of feeling. Silent throughout, the band give weight to the already heavy music with presence and passion. 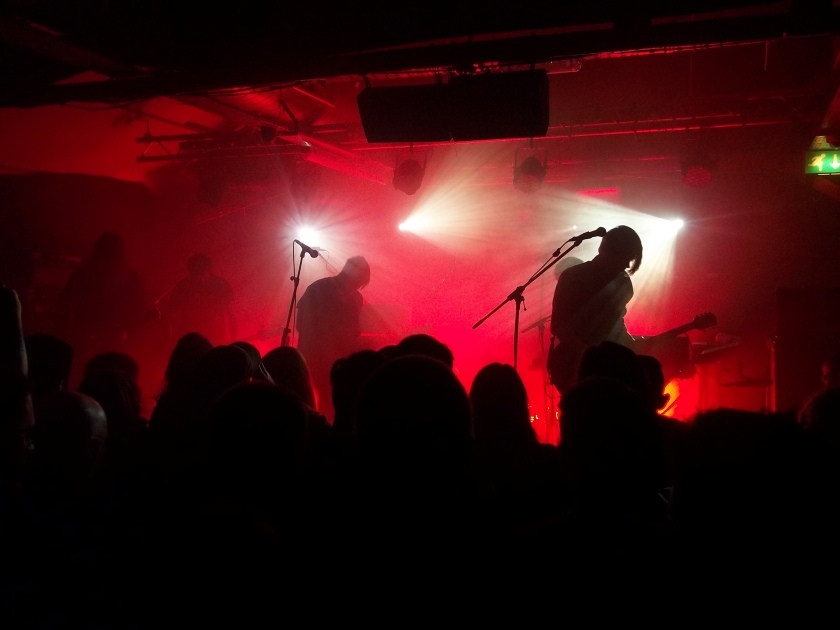 The fifth song, I: The Weapon, another off Vertikal, is followed swiftly by Waiting for You, from Salvation once more. This is another of their songs that I always particularly enjoy. With its winding, building nature it goes down a treat. Starting off calmly and relaxed, it sounds absolutely monolithic once it gets going.

After this song ends in a maelstrom of heaviness, we’re into Somewhere Along the Highway, as the relaxed, understated Marching to the Heartbeats starts us off.

It’s a very strong album on any day, and given the opportunity to experience all of it live in one go is a thing of beauty to behold. The band handle the material with ease and the entire album, over an hour of it, is reproduced with impressive grandeur.

By this point in the evening the sound issues are completely fixed, allowing for all of the various nuances of the songs to shine brightly. The audience are entranced, and so am I.

Two hours after first setting foot on stage, with both a flawless delivery and performance, Cult of Luna are every inch the conquering kings in Manchester tonight.