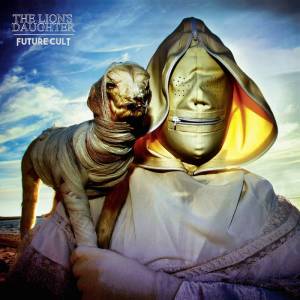 The Lion’s Daughter are a progressive blackened sludge metal band and this is their third album.

The Lion’s Daughter always seem willing to try out new things, enhancing their core of heavy sludge with all manner of different elements depending on their mood and interests at the time. Thus far, for me their most striking work has been their collaboration with Indian Blanket, which has become a veritable classic in my little musical world.

On Future Cult the band have taken up synthesizers and have really gone to town with them, making Future Cult somewhat of a sinister, nightmarish vision of some form of apocalyptic destiny-to-come. This really does enhance the band’s music and add an entire other layer of creepy, haunting atmosphere when compared to their early work.

This is all in addition to the core heaviness of The Lion’s Daughter’s sludgy assault. Grim, punishing, and bleakly violent, there’s a blackened edge to the music that’s complemented wonderfully by the synthesizers.

The songs are immersive and individual affairs, well-written and well-delivered. In the hands of a lesser band the electronic components could easily seem tacked on and extraneous, but The Lion’s Daughter clearly know what they’re doing, and the synthesizers are woven into the very fabric of the music on this album.

Coming across as a 70s horror-inspired progressive metal band that’s been adopted by a modern-day blackened sludge monstrosity, Future Cult is an extremely impressive and surprisingly emotive piece of work.

Bold and impressive, this album has the perfect blend of savage brutality and sinister electronic atmosphere.