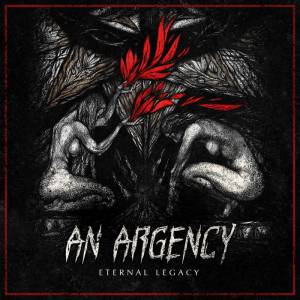 An Argency are a deathcore/metalcore band from Belarus and this is their second album.

So here’s a band that are travelling a path slightly less-worn – self-described as symphonic blackened deathcore, or occult deathcore, Eternal Legacy is the sound of deathcore/metalcore structuring that’s been warped and corrupted by black metal’s sickening touch.

The music takes a familiar deathcore route, only delivers it with a black metal influence to the guitars, keyboards, and vocals.

The guitars are mostly a blackened version of your standard deathcore offerings; beefy, meaty riffs and breakdowns are included as you would expect, but with more of a darker influence to them. Make no mistake; this is definitely more deathcore and metalcore than black metal, but I like that the latter style is an obvious influence on the band.

The keyboards are not omnipresent, but do have a consistent presence throughout these songs. They add an extra layer of darkness to the already quite bleak songs, and are definitely inspired by the more symphonic aspects of black metal’s second wave rather than the more modern and electronic influences that other deathcore bands tend to adopt.

Although there are some deep deathgrowls performed, most of the vocals are high-pitched screams, which sit somewhere between a hardcore scream and a blackened shriek. Other styles, (shouts, etc.), appear here and there, including both clean and semi-clean deliveries. All are well-performed, and there’s a good variety of vocals on display.

An Argency are a band that are doing things a little differently. I very much doubt that this will pick up much traction with your average black metal fan, but it’s great to see the blackened plague infecting a style that it’s typically absent from.

An Argency have impressed. For me, deathcore is a style that, in its purest form, I can tire of very quickly; there’s usually more style than substance. Eternal Legacy, however, combines deathcore’s instant appeal with a blackened depth and bite that adds elements of bands such as Behemoth, Septic Flesh, Dimmu Borgir, and even a touch of Enslaved into the mix. It’s great how the band can accomplish this and still essentially sound like a deathcore/metalcore band, just a different type of one.

I heartily recommend you check this out and give it some time.