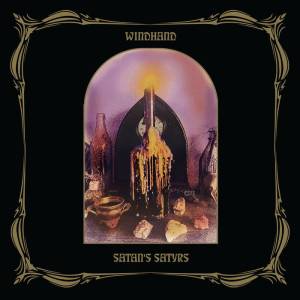 This is a split between Windhand and Satan’s Satyrs, who are both from the US.

Windhand play doom metal, and very nice it is too. On this release they give us 20 minutes of material that’s split into two tracks.

Old Evil is fuzzy and nicely heavy, plying its traditional doom metal trade with the ease of experienced veterans. Windhand know what they’re doing with this kind of music, that’s for sure. It’s hazy, lazy, and puts out the doom vibe, big time. It’s the shorter of the band’s two tracks at six minutes in length, but there’s no doubting the quality of it.

Following this, we get the 14-minute beast that is Three Sisters. Slow, gloomy, and full of glacial riffs, it’s easy to enjoy a monolithic doom track like this. The singer’s seductive, slinky vocals seem to wrap around the rest of the band’s instruments like something both charming and sinister. The organ playing in the background for parts of the song adds an extra layer, and this is a song that I’d be more than happy to see stretched out to double its length. IT’S ALL ABOUT THE DOOOOM!

If scuzzy and dirty Black Sabbath/Electric Wizard-styled doom worship is your thing, then Windhand deliver the goods.

Satan’s Satyrs’ style is a more metal/rock/punk influenced take on the old-school. Providing three songs that last 11 minutes in total, this is an energetic blast of underground fuzz-drenched rock.

Unlike the recent split between Mammoth Weed Wizard Bastard and Slomatics, where the two bands complemented each other so well that they almost blurred into one, it quickly becomes apparent that the Windhand/Satan’s Satyrs split is almost the exact opposite of this; different styles, different moods, and you’d never get the two mixed up.

Think of a punk-influenced garage rock band, and then make them a bit heavier and fuzzier; this is Satan’s Satyrs.

My own personal preferences immediately mean that the Windhand side of this split will get the greater rotation over time, but I do like what Satan’s Satyrs offer up here.

The first track, Alucard AD 2018 is particularly strong, with good attitude and some surprisingly infectious vocals. Succubus is similarly enjoyable, but has more of a doom rock vibe to it. The final song – Ain’t That Lovin’ You, Baby – has a different mood, coming across as a kind of 70s/80s party rock song gone wrong.

An enjoyable split by two different types of band. Give this one a listen.