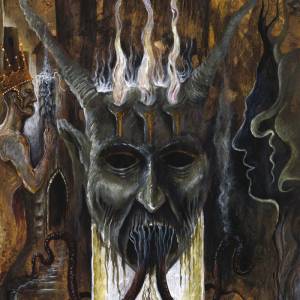 Esoctrilihum is a French one man black/death metal band and this is his second album.

71 minutes of harrowing, terrify blackened evil? Sign me up! The man behind Esoctrilihum has created a monster of an album.

The music here takes a standard black metal base and builds on it with all manner of ugly, twisted building blocks. The artist has created a nerve-shredding apocalyptic structure that looms over the damaged blackened soundscape like some form of malevolent daemonic overlord.

This album sounds like it has escaped from a hidden nightmare dimension. It’s as if a virulent strain of bleakly atmospheric black metal has been forcefully bred with mutated death metal and then injected with grim pseudo-psychedelic blackened drugs and implanted with layers of semi-industrial urban armour. Add to this elements of dark doom infection and a malignant sense of cosmic grandeur, and you have a lengthy exploration of all things damned and hateful.

As you can imagine, there’s a lot going on across this release. Different speeds are tried out and cruelly discarded, various moods and feelings are trampled on, petrified melodies are broken and left to rot; this is a next-level form of unpleasantness.

If you can stomach the rampantly lethal output of this project, then this is a very rewarding album. Engaging and compelling as only the best underground music can be, Esoctrilihum is a project that has what it takes to make an impact in the extreme metal underworld. Raw, atmospherically brutal, and relentlessly scathing, Pandaemorthium (Forbidden Formulas to Awaken the Blind Sovereigns of Nothingness) is not only a mouthful of an album title, but a damn fine listen.