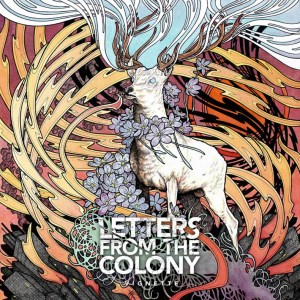 Letters from the Colony are a progressive metal band from Sweden and this is their debut album.

This is complex music, fusing modern progressive and technical metal influences with djent elements to create experimental extreme metal. Vignette is notable for many things, one of which is that it largely takes from the strengths of these styles and leaves the weaknesses floundering in the dust, which is not an easy feat to achieve.

As a starting point, if you mix together bits of Meshuggah, Between the Buried and Me, and Gojira, then you’ll have a good idea of the aural mayhem that Letters from the Colony get up to.

The technicality of the songs on this album means that there’s no lack of things to gawp at as you pull your dislocated jaw off the floor. Importantly, however, this technicality is bent into the shape of actual enjoyable songs, rather than just being allowed to roam freely wherever it wants. Of course, it probably sounds like a huge unfocused mess to anyone that prefers more traditional approaches to songwriting and delivery, but this is resolutely not the audience for Vignette.

The songs are all adventurous and well-written, taking obvious influence from those that have come before them, but using these influences to forge their own path into technical/progressive metal soundscapes. The mix of different styles, paces, moods, etc. could have been sloppy and overly ambitious for a lesser band, but it’s clear early on that Letters from the Colony have firm guiding principles at work with their material. Complexity and technicality is obviously important to them, but these are used to support and develop a song that actually has the ability to connect with the listener in a visceral, emotional way. Music is all about feeling, after all, and this is something that Letters from the Colony don’t forget or let go of.

Modern technical metal and djent can oh so easily be boring, stale, generic, etc., (which is why djent in particular I find to rarely be done very well), but Vignette is on another level entirely. You can tell why they caught the attention of Nuclear Blast early on in their career; not only does this album have all of the requisite super-riffs and hyper-metal that a modern technical/progressive band should have to draw the attention, but it also has a deeper emotive core and ability to create spellbinding atmospheres that really makes an impact.

Whereas a lot of djent/technical metal is standoffish, Vignette draws you in, promising you rich rewards if you can get past its aggressive veneer. It’s well worth it, and gets better every time you listen to it as the music unfolds and gives up its myriad secrets.

I really, really liked this. Have a listen and see what you think.

2 thoughts on “Letters from the Colony – Vignette (Review)”