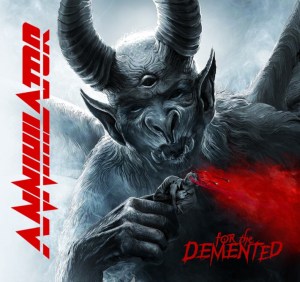 This is the sixteenth album from Canadian metal institution Annihilator.

Annihilator have always delivered quirky, enjoyable, if sometimes varied material for their fans, but no matter what they release it’s always at least good, and always a welcome listen.

Which brings us to For the Demented. I must say I wasn’t expecting this; Annihilator’s sixteenth album is quite the stormer! Delivering 10 songs of kick-ass metal, not only are the band’s songs on top form, but they’re delivered with passion, bite, and more catchy and memorable parts than you can devour in one sitting alone.

With more of an old-school thrash metal feel than some Annihilator albums, this album still takes its time to explore other styles across its playing time. Modern thrash, groove metal, hard rock, and classic metal are all touched bases with at various points, all collected together under the umbrella of Annihilator’s infectious and personable thrash metal.

Head honcho Jeff Waters is on blistering form, with his trademark guitar style instantly recognisable. He’s delivering the vocals himself once again these days, and his charismatic performance is probably one of his best ever.

This is high-octane thrash metal, (for the most part), delivered with a skill and experience that not many can match. I always enjoy a bit of Annihilator, but this is definitely one of the stronger albums in their considerable discography. Many Annihilator fans have been waiting for an album like this, and I’m sure they won’t be disappointed by it.

Highly recommended for any metal fan.

One thought on “Annihilator – For the Demented (Review)”