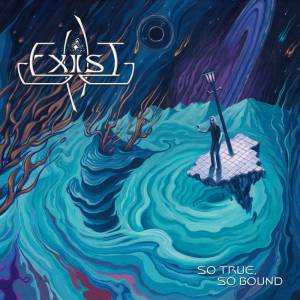 Exist are a progressive/technical death metal band from the US and this is their second album.

Exist have taken the torch from forerunners such as Atheist, Death, and Cynic, and are truly running with it. This means we get an old-school influenced version of the progressive/technical death metal style, as laid down by the aforementioned masters, despite the modern veneer and sparkling production.

A large part of the material here leaves the death metal aspect of their sound behind, actually, although this is never too far from the action. So in a way, this is progressive/technical post-death metal…but what’s in an overly complex genre tag, eh?

There’s almost an hour of music on So True, So Bound, and this time encapsulates a lot of different content. As such, we get a combination of progressive structures, psychedelic workouts, jazz freedom, heavy riffing, technical wizardry, dizzying complexity, serene atmosphere, and all manner of other things.

Keyboard enhancements are a common feature of the music, and these add a great deal to the tracks. They help to foster a true otherworldly atmosphere, one which works alongside the album artwork to transport the listener on a mind-bending musical journey into the cosmos. Exist like to explore.

The vocals are made up of sharp, high-pitched screams in the tradition of the old-school masters above, and these are added to by ethereal cleans that frequently populate the lighter sections. Although these are undoubtedly performed well, the main star of the Exist show is the music itself, and the vocals are just another instrument in the band’s extensive repertoire in this regard.

Although the foundation of this type of music was laid down decades ago, Exist take these influences and update them for the modern era with true talent and flair. This really is a best-of-both-worlds scenario, with old-school and new meeting together in a glorious collision to produce quite a stunning album.

With ambitious music that’s as well-recorded, well-written, and well-performed as this, Exist really are onto something special here. So True, So Bound is remarkable, in all of the right ways.

This is an album you should listen to as soon as you can.

One thought on “Exist – So True, So Bound (Review)”