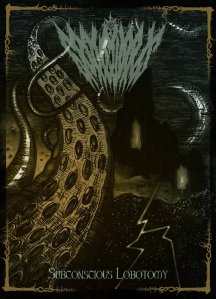 Gravewards are a Greek death metal band and this is their debut EP.

You’ve got to love some old-school death metal, especially when it’s played like it is here and so gloriously represents the esoteric 90s style.

In essence – think of a mix of the 90s versions of bands such as Bolt Thrower, Amorphis, Gorefest, Autopsy, and Obituary.

There’s more than just this here though, as Gravewards paint with a surprisingly rich palette of colours. There are some technical flourishes in the songs, as well as a thrash metal influence that can be heard on occasion. Elements of the winding melodies of death/doom make themselves felt here and there, as does a crushing war metal feel from time to time.

Yes, the songs have a diverse mix of elements all collected and fused together into the meat of the music. They’re well-written and really do take me back to the 90s metal scene. Although this is due to pretty much all parts of the band’s songs in one way or another, I get this feeling from the guitar leads more than anything else on this release. The rhythm guitars come a close second.

The singer’s voice is charismatic and his style fits the 90s vibe given off by the band in heady waves to a tee. He recalls a gruffer version of the Obituary singer. Just like the music, his performance is as authentically old-school as it gets.

I really like this. A lot of old-school death metal is played in a very similar way, but this is not what Gravewards are about. Subconscious Lobotomy gathers a wealth of different 90s extreme metal influences into its warm embrace and reproduces the feeling of the era with such passionate authenticity that this release really stands out from the crowd. The fact that the band also have a quality singer and some very good songs simply makes this even more special.

Hopefully this won’t languish in obscurity, as Gravewards seem to have both the talent and ability to make a huge impact on the old-school death metal scene.

Spread the word far and wide – Gravewards are here and it’s time to step into their world.