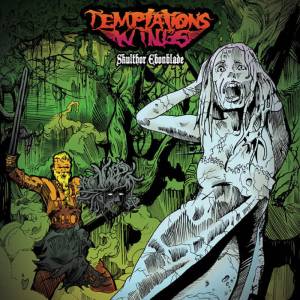 This is the debut album from Temptation’s Wings, a doom/heavy metal band from the US.

Think of a Southern metal flavoured mix between Grand Magus, Candlemass, Down and Orange Goblin. Temptation’s Wings have produced an album worthy to be spoken of in the same sentence as these bands, as Skulthor Ebonblade is very enjoyable indeed.

This is very metal. Full of Grade-A heavy/doom metal, with a firm concept in place, Skulthor Ebonblade is almost 50 minutes of the type of metal that’s infectious and captivating. It’s so tempting to say “they don’t make it like this any more”, but of course they do; Temptation’s Wings are a great example of it.

The songs are instantly catchy and memorable, providing heady appeal with their riffs and chugginess, while also allowing for depth and longevity through the leads, solos and other instrumental parts.

Oh yes, the vocals too. These are very tastily performed. Melodic and full, but with an earthiness to them that sees the singer equally adept at pure clean singing or gruffer vocalisations, the singer is a definite asset to the band.

There’s something very honest about this kind of music, especially when it’s played with such obvious passion and conviction as it is done here.

Skulthor Ebonblade is a very strong album. Check it out.