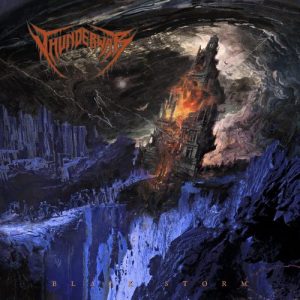 This is Thunderwar’s debut album. They are a death metal band from Poland.

After their very enjoyable and promising EP The Birth of Thunder in 2013, we now have some fresh material from Thunderwar.

Thunderwar play their death metal with a melodic edge, a slight blackened feel and a sense of grandeur that’s aided and abetted by some sterling riffs.

Mixing the catchy aggression of Kataklysm with the old-school catchy groove of Obituary, the catchy melodicism of Dissection and the catchy brutality of Vader – what’s the common denominator do you think? Hmm, do I have to spell it out any more?

Apparently I’m going to for completeness – Black Storm is a very catchy release. The album is chock full of leads, solos, riffs and vocals that stick in your brain and won’t budge an inch once they’re there.

As far as melodic death metal goes, I like mine with an aggressive, brutal edge, but not so much that it eclipses the actual songs themselves. Black Storm is one such album. Thunderwar keep the death metal part of the melodic death metal equation alive and kicking throughout this album, making it even more enjoyable than it may have otherwise been had they diluted their vision at all.

Some of the solos and leads are insanely more-ish. This is a memorable collection of tracks on first listen, and after multiple listens it’s like having the album constantly playing in your head all day long…

Okay, I exaggerate, but it’s definitely the kind of album you find yourself returning to, both by actually listening to it and also by just thinking and recalling it, (which makes you want to go an actually listen to it again). Did I mention this is very catchy…?

As for the singer; his old-school Obituary-esque snarls are nearly as infectious as the music. He clearly knows what he’s doing.

At 44 minutes in length the album is just the right duration to capitalise on the band’s ample skills at providing engaging melodic death metal without going overboard. In fact, I could have quite happily had another song I feel.

This is a highly accomplished and impressive album. If it hadn’t have been released so late in 2016 I can well imagine that this would have graced more year-end lists, (it would have been in mine I’m sure).

Black Storm is a top-class album of very enjoyable cutting death metal with enough variety and content to keep the listener fully engaged throughout.

A must-listen for fans of the style.