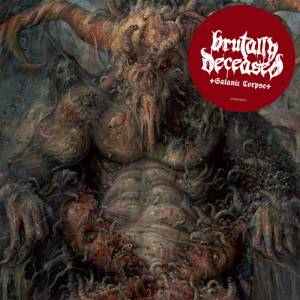 Brutally Deceased are from the Czech Republic and play death metal, this is their third album.

The band features members and ex-members of Heaving Earth and Jig-Ai, it seems. I really, really enjoyed the band’s debut album, Dead Lovers’ Guide, but missed their second, so on this new release it’s way overdue for me to get reacquainted with the band.

I’m pleased to report that they are still toiling away at the old-school Swedish death metal template, tearing at it with obvious passion and enthusiasm. The songs on Satanic Corpse are arguably more uptempo than a lot of bands playing the style, so eager are Brutally Deceased to rev those chainsaws and insert them in places they probably shouldn’t be inserted.

Like all purveyors of the style though, the slower and mid-paced sections are still well-represented, as are the macabre melodies we usually expect; overall it’s all just a bit faster than normal. Gotta love those guitar solos too.

With bowel-loosening vocals that sound wet and sickly in true daemonic fashion, the band have all of the tools they need to spread their rusty chainsaw sound around.

There’s 30 minutes of material on Satanic Corpse and it stinks just right.

Brutally Deceased have not disappointed. If you’re partial to the Swedish style, but are looking for something a bit more lively, vicious and faster than than the usual fare, Satanic Corpse is a recommended listen for you.