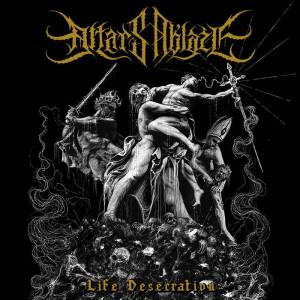 Altars Ablaze are a blackened death metal band from Czechia and this is their debut album.

Holy crap, now this is the stuff! 31 minutes of blistering blackened death metal that takes no prisoners and is utterly merciless. Life Desecration is pure evil and sounds absolutely great. Featuring current and ex-members of Brutally Deceased and Heaving Earth, Altars Ablaze know what they’re doing with their extreme metal.

The best way I can describe Altars Ablaze’s debut album is as a cross between Hate Eternal‘s Conquering the Throne, Nile‘s Black Seeds of Vengeance, Krisiun‘s Conquerors of Armageddon, and Marduk‘s Panzer Division Marduk. The entire album reminds me of something that could have been released about the year 1999, in fact. Yep, this is Grade A stuff.

The songs marry death metal brutality with black metal venom. They’re fast and murderous, with furious speed and lethal savagery their cruel calling cards. These eight tracks absolutely slay, and Altars Ablaze completely destroy the opposition quite convincingly. This is one of those rare albums that just offers a visceral experience of extremity that simply has to be experienced in all of its ferocious glory.

So, so good. Life Desecration is moreish and devastating. Don’t miss this brief-but-potent extreme metal gem.