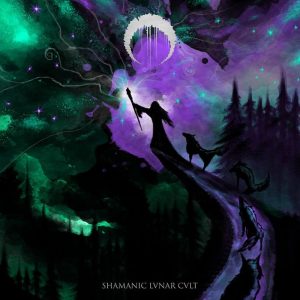 Svlfvr are an Italian blackened doom metal band. This is their latest album.

What we have here is essentially a doom metal band that have fallen to darkness and embraced black metal as a secondary influence. There are some other influences detectable in their sound too, (old Anathema), and they all converge together quite nicely over these 56 minutes.

The songs on Shamanic Lvnar Cvlt have muscular guitars and plenty of dark presence. The old-school black metal influences make for a darker sound than most doom metal bands, but the traditional doom metal aspect of their sound means that they don’t wander too far down the esoteric blackened pathways.

The singer has a powerful voice that he uses to shout, scream, sing and moan. He has a decent range for this kind of thing and is part of the reason, (along with some aspects of the music), that Anathema, (circa The Silent Enigma), springs to mind when I listen to Svlfvr.

Shamanic Lvnar Cvlt is made of songs that have good compositions, showing off the band’s songwriting skills. Classic doom metal structures have been corrupted with blackened disease and filtered through a 90s doom/death lens.

The black metal aspect of their sound means that this isn’t a snail’s-pace delivery; most of it is generally quite upbeat, (although not without its misery and grimness), and blast beats make appearances on occasion too. After all, the core of the band is doom metal, rather than straight doom, and there’s plenty of metal on Shamanic Lvnar Cvlt, especially if you’re a fan of stuff like Venom, Celtic Frost or Triptykon.

With the exception of the last song, which is a whopping 20 minutes long, the rest of the tracks all fall around the 9 minute mark, making for songs that hold the listener’s attention without getting too long and ponderous. To be honest tough, even the last song doesn’t outstay its welcome, and who doesn’t like a suitably epic track now and again?

A very impressive album, and a recommended listen.