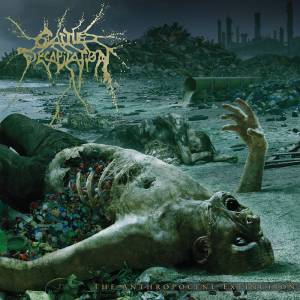 This is the seventh album from veteran US Death metal band Cattle Decapitation.

Based on the concept of humanity dying out due to its own actions, Cattle Decapitation return once more to show that Death Metal can be savage and intelligent at the same time.

Cattle Decapitation’s take on Death Metal is an ever-developing one that seems to only improve over time. Pretty much a Progressive Death Metal band at this point, they still have a core of Brutal Death Metal with a touch of Grindcore, but this has been expanded upon and augmented by Progressive and melodic components, all without sacrificing the essential extremity of the band.

The vocals are impressively delivered and the singer proves he has a versatile and vicious palette of vocalisations to work from, be that grunting nastiness, utter pignoise, hateful screams or strange, mutant, melodic semi-cleans that sound like a strangled Devin Townsend. This latter statement may not sound very complimentary but it is; they’re very emotive in an inhuman way.

The music ranges from the ultra-brutal, to the meaningfully melodic, to the Progressively expansive, to the dynamically riff-heavy, to the atmospherically apocalyptic. It’s a multifaceted and interesting sound that manages to surprisingly accomplish two very important and hard-to-do-tasks – the first is that it manages to remain extreme, regardless of all of these other additions and excursions; the second is that it manges to do this while having an emotional depth that is simply lacking in a lot of bands, never mind Death Metal ones. These are songs that can actually cause an emotional response from the listener, as well as simply being great to bang your head and stamp along to.

This is 46 minutes of quality Death Metal that’s not afraid to do its own thing. Cattle Decapitation are one of those rare bands that really do just get better with age.