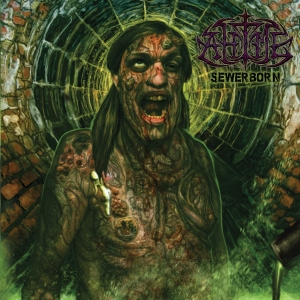 Ahtme, (formerly The Roman Holiday), are a death metal band from the US and this is their second album.

I like death metal that combines technical playing with devastating riffs, a meaty production, and a singer that can growl with the best of them. Which is why I like Sewerborn very much. Containing a raging concoction of surprisingly charismatic brutality, as you listen to this it becomes quickly apparent that Ahtme know how to write a good song.

Ahtme mix intricate technicality with punishing groove to create brutal songs that smash and burn. There are plenty of golden riffs to be had on this release, and Ahtme can get quite inventive in places with their brand of aggression.

Mixing heaviness and hooks with speed and intensity, these songs are very enjoyable and do their damage well. Although both the album and some of the individual songs are longer than you might expect for this type of thing, Ahtme get away with it due to how well they perform and deliver their creatively bruising music.

As for the band’s singer, he boasts a very satisfying growl, one that sounds like he’s gargling blood and venom.

Fans of bans such as Cattle Decapitation, Job for a Cowboy, Suffocation, etc. should definitely check this out.