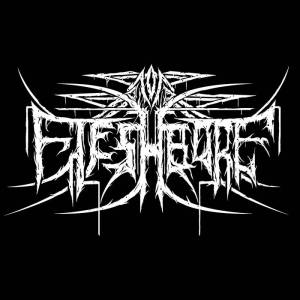 Fleshbore are a US death metal band and this is their debut demo release.

One of the things I really like about demo releases in this day and age is that they no longer have to sound like they’ve been recorded by a guy screaming into a bucket in a garage somewhere. Hail technological progress! Which is a roundabout way of saying that Fleshbore sound very, very good on this demo. In fact, I’ve heard some official full-length albums that sound worse than this.

So what do we have here then? The band play harsh death metal with a large technical component, while still also making use of melody to soften the edges. Think, maybe, The Black Dahlia Murder meets Suffocation meets Cattle Decapitation.

With the shortest track here lasting six minutes and the entire release, (four songs), lasting almost 29 minutes, the band don’t do things by halves, and there’s a lot of juicy content to be had. The songwriting is well-developed, and the band’s sense of dynamics and structure is already well-defined at this early point in their career.

I like that there’s a good amount of technicality in the music, but I also like that this is tempered by the more melodic aspects of their sound too. They’re not afraid to simplify when needed either, and there are some quite hair-raising moments when the technicality gives way to a stripped back and hugely heavy riff that just tears through everything. Very nice.

The singer has an extremely good voice for this kind of work too. Early on in a extreme metal vocalist’s career you can usually still hear some strain in the person’s voice as they struggle to get used to the evil noises they’re belching forth; there’s no such issue here, and the singer of Fleshbore sounds like he’s been doing this for years. Maybe he has, who knows? Regardless; his performance on this demo is first-rate.

I can’t help but feel that Fleshbore should just have given this demo a proper name and released it as their debut EP, rather than as a demo recording, such is its quality level. Ignoring all of that though – the songs that Fleshbore have unleashed into the world are very impressive and very enjoyable. I now look forward to their next release with great expectations.