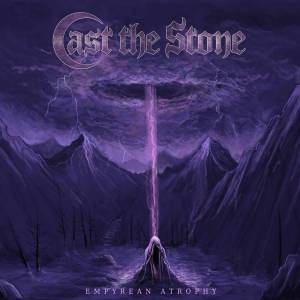 Cast the Stone are a death metal band from the US and this is their latest EP.

An EP this may be, but we still get a meaty 27 minutes of material to tear into. Featuring current and ex-members of bands such as Scour, Cattle Decapitation, and Misery Index, (among others), this release draws on the individual band members’ experience, but easily stands as its own distinct entity.

Apparently the aim with Cast the Stone is to achieve a synthesis between the American and Swedish styles of death metal, and I have to say that Empyrean Atrophy goes a long way toward achieving this. Mixing the brutality of USDM with the melody and sinister atmosphere of the Swedish style, we also get plenty of heavy groove and even some progressive elements. Yes, this is a very well-rounded release.

I have a well-documented soft-spot for Swedish death metal, so it’s great to hear the spirit and core of this delivered here with such skill, while also being enhanced with the other aforementioned elements. I particularly like the band’s sense of expansive exploration they bring to the music; Swedish death metal is such a well-defined and classic style that it’s relatively hard to add in other elements without moving it significantly away from its core sound. Cast the Stone successfully manage to avoid this latter issue on these songs, however, with the progressive aspects of the music particularly complementing and enhancing the style very well.

In addition to the obvious songcraft that’s gone into these tracks, the music is professionally recorded and the vocalist has a monstrous growl. Cast the Stone have the entire package for someone like me to really enjoy.

Crushing and heavy, but with an emotive melodic edge, this is a high quality death metal release.

(Also, I was really hoping that the last song – Jesusatan – was a cover of the Infestdead original off the classic album of the same name. Do you know what? It is. When I got to this track on the EP I was very, very happy indeed).