Vredehammer’s second album Violator is an incredibly enjoyable 35 minutes of blackened aggression that I can’t seem to stop listening to. Wanting to know more, mainman Per Valla provided me with some more information…

We are Vredehammer from the north of Norway. We play extreme metal. Some people compare our music to Decapitated, Keep of Kalessin and Testament etc.

Give us a bit of background to Vredehammer

I started Vredehammer as a soloproject in 2009 without putting too much effort into it really, but when people seemed to like it and I had several offers from labels, I decided to start taking it more seriously. Before we started doing live shows Vredehammer had already released 3 EP`s. After this we signed to indie recordings and started releasing albums and doing tours etc.

Probably the same as for all metalheads my age I would say. Testament, Pantera, Metallica, Megadeth, Sepultura and so on.

At the I am listening a lot to the new Dream Theater album “The astonishing”. I definitely recommend it. A real masterpiece!

How do you feel that you fit into the wider Black Metal scene?

Personally I don’t think we are a black metal band, but more just an extreme metal band. Given that we live far north in Norway we don’t really associate with the rest of the Norwegian bands, this way I think we have more freedom to do our own thing and create our own sound with time. Besides that I feel we offer the same amount of quality as other established artist in the genre. 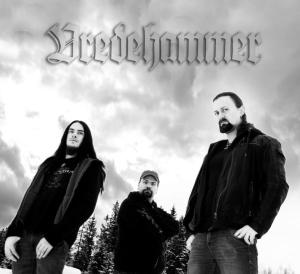 Give us a bit of background to Violator – any particular concepts or ideas you want to discuss?

The music was inspired and written after having done a couple of tours with Six Feet Under. I was never really into their music until I saw them live, and the power they distribute with their groovy material. I wanted to adopt this feeling and offer a more groovy sound and feeling live. The lyrics are mainly inspired by books from Stephen King, war and some personal lyrics where I share my views on ignorant people and the state of the world.

The album artwork was created by Remi Juliebø and Indie Recordings. They thought it looked cool and so did we hehe.

I write all the raw material and the lyrics. In the studio all members of the band put their personal touch on the songs through their instruments.

This time the recording process was insanely smooth. No bumps in the road plus we had a really great studio technician Stamos Koliousis. Basically I tracked the guitars at home, sent the files to our bass player who did the same, and in the end our drummer Felix tracked the drums in a studio in Oslo.

My favourite song is Deadfall. It’s a heavy motherfucker!

What does the future hold for Vredehammer?

Hard work and quality releases. That’s basically what we can offer. The rest is up to our listeners, promoters, festivals etc. 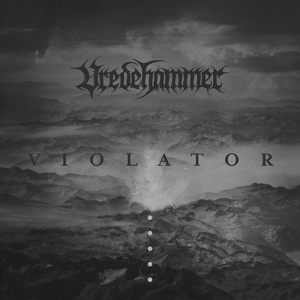 This is Vredehammer’s second album. They play Black Metal and are from Norway.

Vredehammer play aggressive Black Metal that keeps the core of the genre alive and well, while merging it with a state-of-the-art blackness that bands like Satyricon, Keep of Kalessin and Temple of Baal do so well. Add a bit of Death Metal in the form of something like Behemoth and even a touch of Aura Noir-esque Thrash and you have a good overview of Vredehammer’s style. Tracks like Ursus even have a bit of the Amon Amarth about them, to my ears.

The vocals consist of dark outbursts that strike a fine balance between legibility and outright harshness. Sitting somewhere between the styles of Black and Death Metal, they work well to provide a focal point for the music without dominating it.

Powerful rhythm guitars form the bedrock of the tracks and these punish and damage for all they’re worth. Interestingly though, the band build on these strong foundations to provide a more well-rounded listening experience than you might expect; Violator is not a one-dimensional album.

Twisted melodics and bright, ethereal leads occasionally add colour and texture to the band’s blackened rhythms, allowing them to explore wider pastures that their brutal tendencies might otherwise preclude them from. This adds a lot to the album and raises it to another level, quality-wise. This is all wrapped around their inherent malevolent nastiness though, which is never too far from proceedings.

Boasting a strong production to round things off, Violator is a very enjoyable album, and at 35 minutes in length it’s easy to get your fill of their blackened aggression.