Omnizide’s latest release Nekroregime is a blackened assault on the senses. The band play blisteringly fast and mid-paced blackened groove equally as well as each other, and the entire album is a dark and sinister treat. END_OF_DOCUMENT_TOKEN_TO_BE_REPLACED

This is the second album from Swedish black metallers Omnizide.

As the follow up to 2014’s very pleasing debut album Death Metal Holocaust, Nekroregime continues the band’s blackened assault on the senses, added to and infected by some good old-fashioned death metal influences here and there. END_OF_DOCUMENT_TOKEN_TO_BE_REPLACED 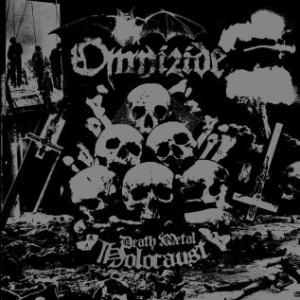 Omnizide are from Sweden and play Black Metal with a hint of Old-School Death Metal.

The band favour the type of Black Metal riffery of older Dark Funeral or Marduk, (but without the all-out speed of some of their assaults), combined with a Carpathian Forest feel to some of their work. Mix this with some rotten Old-School Death Metal and you’ll have a general idea of where Omnizide are coming from.

Even though the band call themselves Death Metal, and the album title has it in its name; this is still predominantly a Black Metal release for me. A lot of the riffs, the production and sound, the raspy vocals, the general feel of the songs – it all has Black Metal stamped over it in large indecipherable letters as far as I’m concerned. Not that it really matters of course; all that matters is that as soon as you play this you’re instantly transported to times past and you can really feel the darkness and hate flowing into your system.

The songs rage and chew their way through the running time. Sometimes fast, sometimes slow, always reeking of antagonism and contempt. This is very authentic music. There is nothing fake or staged going on here. You can almost taste the blood on the singer’s lips as he shreds his vocal chords in the name of his art.

Overall a very good album that anyone who likes this kind of music should be able to get something from, and it just gets better with repeat listens.