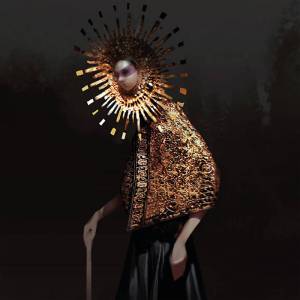 This is the debut album from Natt, a Norwegian progressive/post-rock/doom band.

Natt contains just three songs, with 45 minutes of music. They’re an instrumental duo, although they’re joined on this recording by session musicians on bass and drums/percussion, (the latter from Enslaved). I’m not normally drawn to instrumental music, but one look at the strangely disturbing album artwork made me want to hear this work, and I’m so glad it did.

This is mystical and esoteric music, that nonetheless still manages to be expansive and welcoming. It’s highly expressive, evocative, and atmospheric, with a rich emotive and charismatic presence that asserts itself immediately and doesn’t let you go until the entire 45-minute journey has played itself out. The epic songs are wonderfully crafted, and exude quality and character from the very start; Natt is instantly engaging, and straight away you know you’re dealing with something special. Repeated visits to this album’s shores only reinforce this, and as you get to know its atypical charms more and more secret rewards reveal themselves.

Natt deploy a variety of sounds, instruments, styles, and creative choices across these lengthy and absorbing tracks. I suppose you could loosely characterise Natt as a mix of progressive rock, post-rock, and progressive doom. Whatever you call it though, it’s a thoroughly immersive and worthwhile experience.

Natt create multifaceted soundscapes that are transportive in their seductive charms. It’s easy to get lost in the band’s enticing music as it takes you away from the mediocrity of everyday existence and transports you to otherworldly realms that simply have to be experienced. The moods, atmospheres, and feelings explored on Natt are compelling, and I recommend spending some quality time with this record.

If you’re looking for something out of the ordinary then Natt’s work is for you. Fans of acts like Year of No Light, Amenra, Hemelbestormer, Pelican, Isis, and Jesu should check this out.