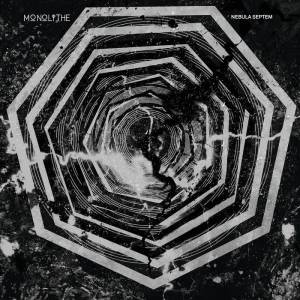 Monolithe are a doom band from France and this is their seventh album.

I’m a big fan of Monolithe’s increasingly forward-thinking doom metal, (see here, here, here, and here), so I was excited to hear their newest opus.

Nebula Septem comes with quite the concept, based around the number seven. As you may have noticed, this is the band’s seventh album. Also, there are seven songs, each one lasting seven minutes. The album was worked on by seven musicians. Each song begins with one of the first seven letters of the alphabet, and each song is in one of the seven notes of the western scale – from A to G, (apparently). A lot of thought has clearly gone into the construction of this album.

Musically, on Nebula Septem Monolithe continue to spread their wings and expand on their core funeral doom style. Over the last few albums, and the previous two especially, the band have begun to add progressive metal elements into their sound, and this has worked very well for them. This trend continues on Nebula Septem, with the band simply going from strength to strength in most areas of delivery.

This release contains what is probably some of Monolithe’s strongest material. Each song on this album is well-written and has clearly been constructed by people with firm goals in mind. All of the tracks have their own flavour and identity, with each one offering a different variation on the core theme for the listener to enjoy.

The majority of the music on Nebula Septem is suitably downbeat, slow, and majestically depressed in nature. The last point – majestically depressed – encapsulates what a significant amount of Monolithe’s sound is about for me; the band craft music that’s obviously full of misery and woe, (the bread and butter of funeral doom, so to speak), but build aspects of epic grandeur onto this, resulting in music that’s sometimes paradoxically able to be as uplifting as it is downcast.

Monolithe’s sprawling, grandiose music is as affecting and engaging as ever. As the albums roll by the average song length may be getting shorter and shorter, but the quality levels have not suffered at all due to this narrowing of focus.

As I have said about this band before, Monolithe are at the top of the doom game, and if you’re someone that’s partial to a bit of progressive/funeral doom, then this album is a must.