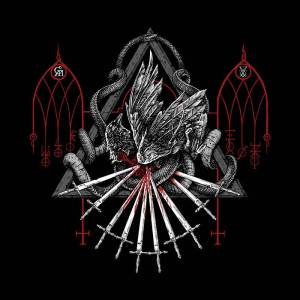 This is the eighth album from US black metallers Goatwhore.

Playing an unholy mix of black, death, and thrash metal, Goatwhore are a band that I always enjoy. The band’s last couple of albums were very enjoyable slabs of venomous ugliness, (2014’s Constricting Rage of the Merciless and 2017’s Vengeful Ascension), so it’s great to have some new material from the band after so many years.

Goatwhore spread a plague of blast beats, sharp riffs, and brutal aggression across the album’s 47 minutes, and they do so with maniacal glee. This is music that exists for the thrill of the hunt and the roar of the pit. This is intensity channelled by songwriting smarts into 12 tracks, (and one underwhelming intro), of darkness. Goatwhore’s songcraft is on fine form throughout Angels Hung from the Arches of Heaven, imbuing the music with a level of shaped mayhem and chaos that’s easily satisfying.

The blackened riffs are immediately arresting, and only grow in potency over time. Alongside this we also get treated to some screaming solos and the occasional macabre melody. The bass provides some vital underpinning power, and the drums punish and pound. The demonic singer is as charismatic and infernal as always; his screams are caustic, and his growls deeper and nastier than ever.

The band have a talent for their hybrid style, raging with death metal brutality, raw blackened hatred, or ripping thrash riffage. They’re not afraid to show off their more atmospheric side either, and the title track and album closer And I Was Delivered from the Wound of Perdition are both great examples of how they do this effectively.

Angels Hung from the Arches of Heaven is yet another strong release to add to Goatwhore’s already impressive discography. It offers the listener a feast of satisfying and enjoyable black/death/thrash, and is a great listen through and through.