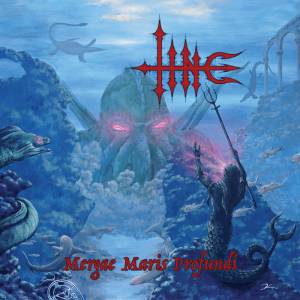 This is the second album from US solo symphonic black/death metal act Tine.

Tine’s debut album – The Forest Dreams of Black – was one that I enjoyed a great deal, and I can’t quite believe that it came out seven years ago. I’m pleased to say that we now have a new album on the horizon – Mergae Maris Profundi – which provides us with 54 minutes of blackened death metal to hungrily consume.

The music combines black and death metal into aggressive songs that have the latter’s brutal immediacy and the former’s atmospheric flourishes. The artist behind the band has continued to develop his songwriting, resulting in a collection of tracks that builds further on the strengths of the first record.

There is a greater sense of cohesion and flow to Mergae Maris Profundi. While not absent on the debut album, this feels more refined on this new one. The songs also have a more dynamic nature to them now, at least on occasion, and the death metal aspect of the music has been leaned into a bit more heavily in places. I particularly like some of the areas that the artist has started to push himself too, especially in some of the more atmospheric/emotive sections. The prime example of this is during longest cut A Cetacean Dirge, which boasts a central section with rich atmosphere and clean vocals that’s impressive.

The blackened symphonic side of the music is more present and available than it was previously, and sounds more self-assured in its delivery. These elements help provide an old-school atmosphere to the jagged, riff-filled heaviness of the rest of the music. This is also true when it comes to Tine’s use of melody. The artist shows a keen understanding of how to use this. When it is applied can be as important as when it isn’t, and when it is used it’s striking and well-developed. There also appears to be a subtle relationship between the symphonic and the melodic elements, as frequently you’ll have the latter appear, only to be replaced by the former.

I’m very pleased to have Tine back with a new record. Mergae Maris Profundi is both enjoyable and immersive, building on what the first record did well to produce a second that improves on this.

A recommended listen for fans of blackened death metal.