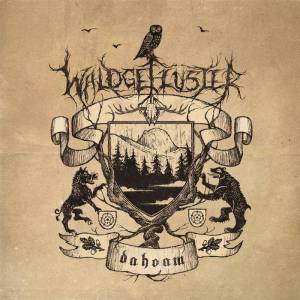 This is the sixth album by German black metal band Waldgeflüster.

I very much enjoyed 2016’s Ruinen, and then 2019’s Mondscheinsonaten appeared and saw the band’s atmospheric brand of blackened music take another strong step forward. So, what of Dahoam then?

Well, Dahoam is something quite special. Across 49 minutes of nature-inspired black metal, Waldgeflüster have created a rich tapestry of dark, melancholic art.

A beautiful acoustic piece opens the album. It’s a rare instance of an intro track having value in and of itself. There’s also an extended interlude and outro on the album. Before your eyes glaze over, these are not the usual waste of space throwaway tracks that most bands vomit out. No they are both wonderfully crafted and delivered. They’re beautiful pieces, and the theme of beauty is one I’ll keep returning to across this review; Dahoam is simply a beautiful album, even at its darkest.

The main songs are some of the best that Waldgeflüster have penned. Melodic and atmospheric, the band’s black metal is textured and fertile.  It feels alive, like it’s part of the nature that inspired it. Keyboards, acoustic guitars, and folk elements enhance the music, adding emotive layers to the atmospheric blackness. Clean vocals join the harsh ones on occasion, providing extra feeling and expressive highlights. Of the harsh vocals, these are already much more charismatic and emotive than those of many similar acts, so the clean singing just adds yet another level of immersion and enjoyment. Guest vocalists also appear, (from Harakiri for the Sky and Panopticon), further enriching the music’s scope.

The songs are well-written and beautifully arranged. The music captures the raw beauty of nature, as well as the hardship and the cold unfeeling violence that can occur. This is music that immerses the listener fully. Even the more aggressive parts are whirlwinds of atmosphere and feeling.

This is an album of atmospheric depths, raw beauty, and emotive splendour. Waldgeflüster know how to craft musical soundscapes that enthral and captivate; these songs are arranged to capture your imagination, and they flow like a river from one to the next and on to their ultimate destination. And when you get there, not only do you want to take in the sights that are revealed to you, but you just want to embark on the entire journey all over again.

Waldgeflüster have created something impressive here. Dahoam is a triumph, and this is an album to keep returning to again and again over time.

Essential listening for fans of the style.